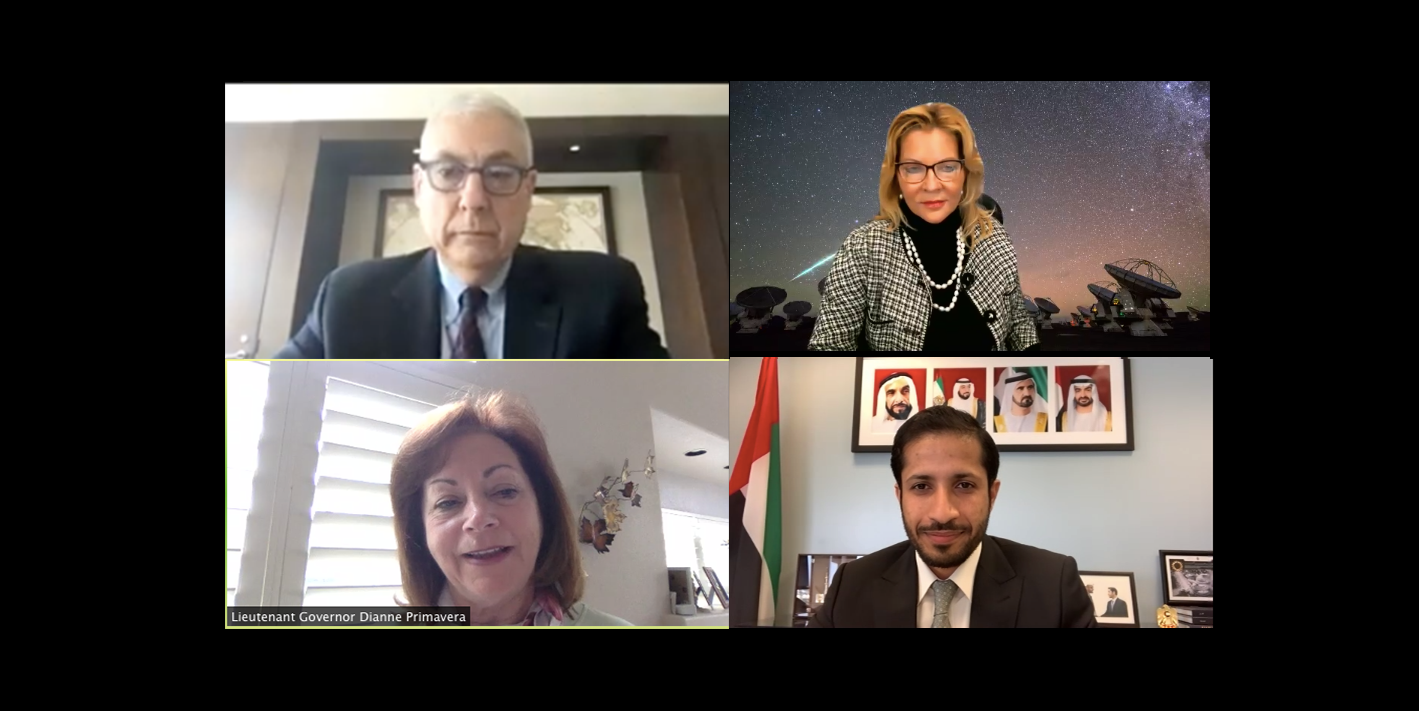 Colorado Lieutenant Governor Dianne Primavera, U.A.E. Consul General in Los Angeles H.E. Hazza Alkaabi, and Space Foundation COO Shelli Brunswick headlined a virtual trade mission to the U.A.E. to enhance collaboration between Colorado and the U.A.E.The online trade mission, co-hosted by the Colorado Office of Economic Development and International Trade and the U.S.-U.A.E. Business Council, comes as a precursor to in-person engagement between Colorado and the U.A.E. later this year. A full video of the event can be found here.

The U.A.E. and Colorado share a strong relationship that is poised to continue developing on the heels of the Hope Probe Mars Mission. The historic launch of the Hope Probe and its successful insertion into orbit around Mars was made possible through a partnership between the U.A.E. Space Agency and the University of Colorado at Boulder’s Laboratory for Atmospheric and Space Physics (LASP). Panelists remarked on both the implications of this partnership for future cooperation in aerospace and space and the potential for collaboration in other key sectors including healthcare and life sciences.

Lieutenant Governor Dianne Primavera set the stage for the mission by highlighting Colorado’s innovative capabilities and the significance of global partnerships to building strong and sustainable Colorado business ecosystems. Lieutenant Governor Primavera, who serves as Co-Chair at the Colorado Space Coalition and as the National Vice Chair for the Aerospace Space Association, outlined that Colorado has the largest concentration of private aerospace employment. Moreover, Colorado, which is “already a mile closer to the cosmos and heaven” is the “proud home of both prime contractors and small aerospace businesses,” which together employ over 33,000 Coloradans. From 2015-2020, Colorado saw over 30% employment growth in the sector.

Lieutenant Governor Primavera also discussed Colorado’s thriving medtech industry, which is the sixth largest in the nation. She noted that the sector has experienced major growth in the past several years, fueling innovation and investment in the Colorado economy.

Lieutenant Governor Primavera underscored that “partnerships with other nations,  including the U.A.E., are vital” for Colorado’s “continued innovation and commitment to exploration.” In 2020, Colorado exports to the U.A.E. amounted to $209 million, and a number of Colorado companies have expanded to the U.A.E. Companies including Ball Corporation, LogRhythm, and Palantir have set up regional headquarters and locations in the U.A.E.

Education marks another linkage between Colorado and the U.A.E. with Emirati students developing aerospace expertise at Colorado Universities. Lieutenant Governor Primavera made note of the partnership between the University of Colorado at Boulder’s LASP and the Mohammed Bin Rashid Space Center.

The U.A.E.’s Consul General in Los Angeles, H.E. Hazza Alkaabi, introduced the U.A.E. and the important ways in which Colorado businesses can become involved in the country’s diversification goals. He stressed the significance of 2021 as the 50th anniversary of the U.A.E.’s founding and the start of Expo Dubai, noting that the shared values of the U.A.E. and U.S. have resulted in shared achievements that will be celebrated this year. Consul General Alkaabi explained that “Moving forward, we can accomplish even more.”

Shelli Brunswick, Chief Operating Officer at the Space Foundation, shared the importance of bilateral U.S.-U.A.E. partnerships in space innovation and emphasized that advancements in the global space ecosystem benefit all. Citing the Global Space Foundation’s annual report from 2019, Ms. Brunswick stated that the global space ecosystem is worth $424 billion and is projected to grow to over $1.3 trillion by 2030. Moreover, she explained that space contributes to a wide range of sectors including healthcare, data, AI, virtual reality, and even clothing. Ms. Brunswick reiterated Colorado’s leadership in this important sector, stating that Colorado has the second largest aerospace economy for the private sector in the U.S. and is home to “an educated workforce, a dynamic atmosphere for business growth, and a hub for high-tech innovation.” In fact, Colorado is home to nine of the top ten aerospace companies in the country, hosts NASA research facilities, and boasts the top engineering programs in the country.

Consul General Hazza Alkaabi discussed U.A.E.-U.S. partnerships in healthcare and life sciences and explained that “The U.A.E. is working with leading global institutions to develop healthcare systems.” Notable partnerships include Cleveland Clinic Abu Dhabi, Johns Hopkins’ work in the U.A.E., and the U.A.E.’s collaboration with the Susan G. Komen Foundation. Consul General Alkaabi stated that he would welcome the contributions of Colorado companies to the U.A.E.’s important work in the healthcare sector.

Ms. Brunswick discussed the value of “action and impact” in the U.A.E.’s realization of its ambitious space goals. She explained that the U.A.E.’s partnership with the University of Colorado at Boulder, which began in 2014, supported the success of the Hope Probe and will lead to future discoveries. She lauded the U.A.E. for  “using space to fuel economic potential, workforce development, and international collaboration,” and highlighted future opportunities for Colorado-U.A.E. cooperation in space. These opportunities, she explained, include the U.A.E.’s 2024 rover mission to the moon, its Mars scientific city, and its goals in 3D printing, AI, robotics, and agriculture.  Commenting on the U.A.E.’s space journey, Consul General Alkaabi added that “this was a dream” that the U.A.E. turned into reality.

Consul General Alkaabi further elaborated on the U.A.E.’s economic diversification plans, stating that the U.A.E. is “committed to finding solutions to address long-term challenges through renewables, clean energy, technology, education, health, water, and space.” The U.A.E. is building its expertise in these important areas and “sees this [energy] transition as an opportunity that works hand-in-hand with its long-term vision.” Consul General Alkaabi explained that he views the U.A.E.’s work to develop these sectors as a great opportunity for collaboration with the state of Colorado.

​Consul General Alkaabi discussed the U.A.E.’s potential as both an export destination and regional business headquarters for Coloradan companies. He noted the U.A.E.’s strategic location, which is within an eight-hour flight of two-thirds of the world’s population. He also reviewed the U.A.E.’s major investments in infrastructure, such as ports and airports. Moreover, he outlined some recent reforms that have reified the U.A.E.’s leadership in terms of ease of doing business in the region.

Panelists spoke to the value of education in developing workforces to fuel key business sectors including the aerospace sector in both the U.S. and U.A.E. Ms. Brunswick explained that a workforce shortage and skills deficit is the one thing that puts the economic potential of space at risk. This, she explained, is one of the reasons why the Space Foundation is working to create role models and career opportunities in STEM and aerospace in particular. Ms. Brunswick pointed out that the Space Foundation is looking to partner with the U.A.E.’s Arab Space Pioneer Program to create an “organic, regional workforce” that will be responsible for “unlocking innovation and technology.”

The virtual state mission concluded with a conversation about Expo 2020 Dubai. This global event will provide Colorado businesses with the opportunity to showcase its innovation in space, life sciences, and other important business verticals.