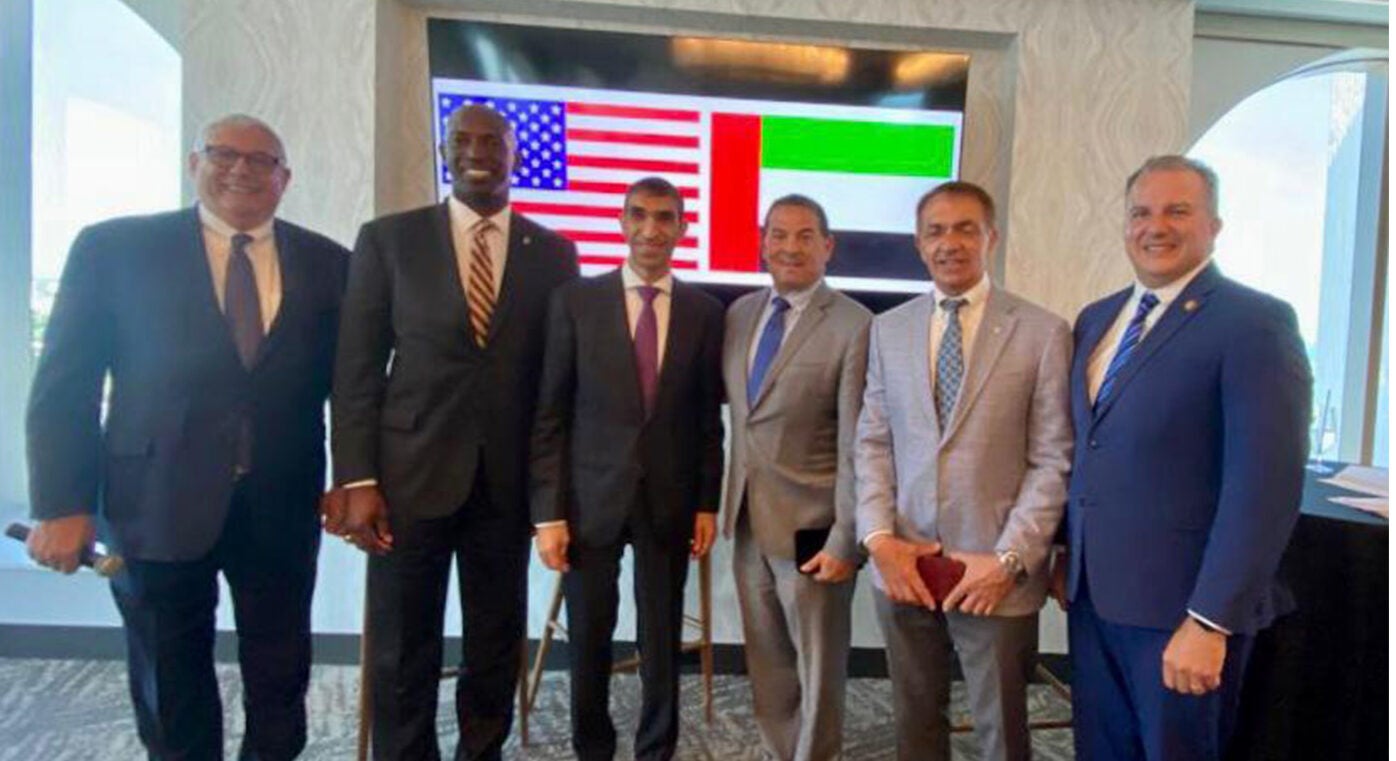 The U.S.-U.A.E. Business Council hosted a discussion and reception on Thursday, June 23rd in Ft. Lauderdale, Florida in honor of visiting U.A.E. Minister of State for Foreign Trade His Excellency Dr. Thani Al Zeyoudi. This event builds on the strong relations between the state of Florida and the U.A.E. developed over the course of multiple official visits to the U.A.E., including by the Mayors of Broward County, Fort Lauderdale, Miramar, and Miami in March of this year.

Business Council President Danny Sebright noted yesterday that His Excellency’s visit reflects the long history of deep political, economic, and military ties between the U.S. and the U.A.E., as well as the shared values that bind the two countries together. Mr. Sebright implored businesses in attendance to explore opportunities for partnership and expansion in the U.A.E. as the U.A.E. diversifies its economy away from oil, while also not taking these opportunities for granted.  Sebright also spoke of the opportunities for U.A.E. investment in south Florida represented by H.E. Dr. Thani’s visit.

In his official remarks to the group, H.E. Al Zeyoudi spoke about the bilateral trade and investment relationship, COP 28, and the U.A.E.’s ambitious series of social and economic reforms known as the “Projects of the 50” that undergird the goals of the U.A.E. leadership to double the size of the U.A.E. economy over the next decade, and to create the most dynamic economy in the world. Regarding the Projects of the 50, His Excellency detailed its role in helping the U.A.E. become a global business hub, not just a regional hub, through specific initiatives such as liberalization of foreign ownership restrictions, and modernization of visa and work permit programs. His Excellency spoke about the significance of the U.A.E. hosting COP 28 in 2023, including ways in which the business community can become involved with this endeavor.

The Mayors of Broward County, Ft. Lauderdale, and Miramar Florida shared insights from their recent trip to the U.A.E., and the numerous relationships and business ventures that have developed as a result of their trip. All highlighted the importance of building relationships with government and business leaders in the U.A.E. in their efforts  to advocate on behalf of their communities while in the U.A.E. They underscored their belief that  the expansion of bilateral trade and investment with the Emirates would quickly follow these important rounds of visits. The Mayors of Lauderdale Lakes and Hollywood Florida, and the CFO of the State of Florida were also in attendance to learn more about the U.A.E. and show their support for the bilateral relationship.

In March 2022, the Mayors of Broward County, Ft. Lauderdale, and Miramar led a delegation of business leaders on a whirlwind 5-day visit to the Emirates of Abu Dhabi, Dubai, and Sharjah.  During their visit to the U.A.E. and at a dinner hosted by the Business Council, the Florida state officials explored avenues to enhance collaboration between the U.A.E. and Florida, particularly in the areas of investment, tourism, city planning, and healthcare.  The timely gathering followed the U.A.E. visit  of Miami Mayor Francis Suarez a week before in March.  The timing of these visits also allowed all of the Mayors and their delegations the opportunity to visit Expo 2020 in Dubai.

Strong bilateral business ties exist between south Florida and the U.A.E., as evidenced and supported by the direct Emirates flight between Dubai and Miami as well as Gulftainer’s significant investment in Port Canaveral. In July 2021, Emirates Airline began its first-ever passenger service between Dubai and Miami, opening up new business and leisure opportunities between the U.A.E. and South Florida. Emirates has also been flying to Orlando since 2015, and it previously serviced South Florida through Fort Lauderdale-Hollywood International Airport from 2016 through 2020.  A number of other name brand U.A.E. companies are considering new investments in south Florida.