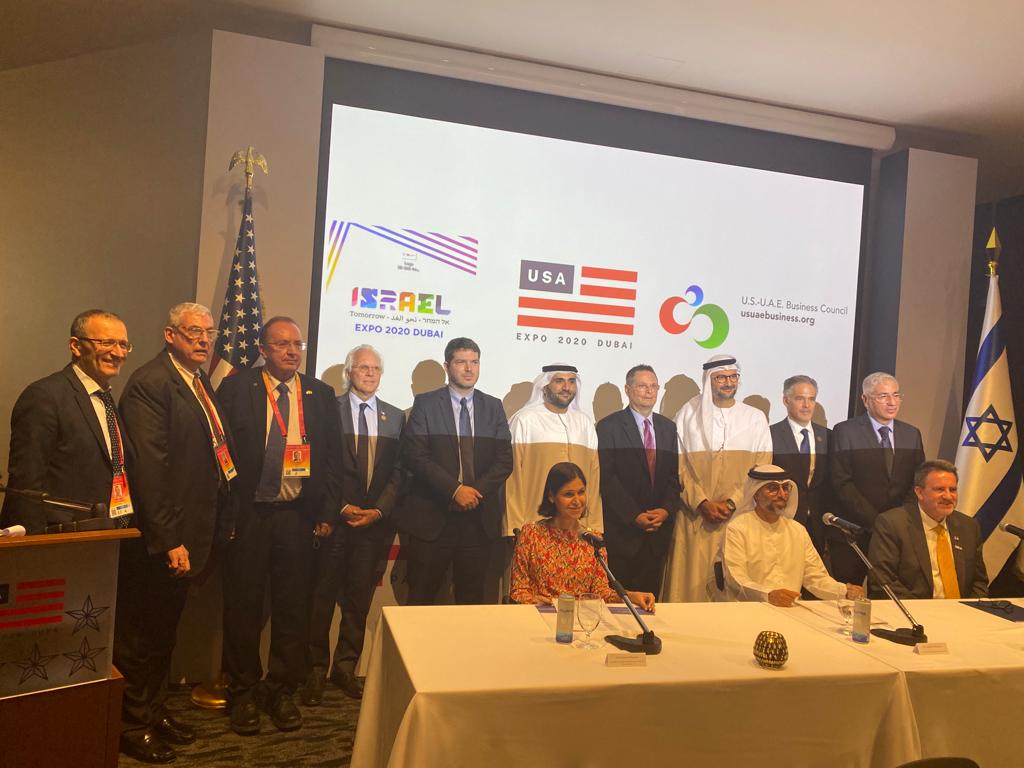 The U.S.-U.A.E. Business Council, in collaboration with the Israel Pavilion and the USA Pavilion at Expo 2020, hosted a trilateral meeting and business discussion on 23 November 2021 with Israel’s Minister of Energy, Her Excellency Karine Elharrar; the U.A.E.’s  Minister of Energy and Infrastructure, His Excellency Suhail Mohamed Al Mazrouei; and the U.S. Chargé d’Affaires in Abu Dhabi, Sean Murphy. The event took place at the USA Pavilion at Expo 2020 Dubai.

The ministers and the U.S. Chargé underscored the critical role of trilateral U.S.-U.A.E.-Israeli cooperation in advancing clean energy at a two-part trilateral Abraham Accords business meeting and discussion with the global community.

Sean Murphy, Chargé d’Affaires at the U.S. Embassy in Abu Dhabi, welcomed guests from around the world to the USA Pavilion. He described U.S. Special Presidential Envoy for Climate Secretary John Kerry’s visit yesterday to the U.A.E. as a demonstration of the U.S. commitment to trilateral cooperation in green energy. The Abraham Accords, he explained, is celebrated as a bipartisan victory in the U.S., and climate change mitigation is one key area in which we can make a difference together.

His Excellency Suhail Mohamed Al Mazrouei, U.A.E. Minister for Energy and Infrastructure, shared the U.A.E.’s contributions to advancing clean energy and its ambitious goals for the future. He noted that the U.A.E. aims to commercialize green hydrogen as a means of maintaining its position as an energy exporter while also contributing to a greener future. Affordability, he added, remains one of the largest challenges to the widespread adoption of green hydrogen. “With this challenge,” he emphasized, “it is silly to work on anything else.” The U.A.E. will continue to move quickly to meet net zero targets while working hand in hand with Israel, the U.S., and other global partners.

Her Excellency Karine Elharrar, Minister of Energy for Israel, spoke to the significance of trilateral cooperation in the development of clean energy sources. She pointed to the historic U.A.E.-mediated energy and water deal between Jordan and Israel that was signed yesterday at Expo 2020 Dubai as a key example of Israel’s partnerships with the broader region following the signing of the Abraham Accords. Moreover, she noted the critical role of the private sector in driving change. “Together,” she said, “we will arrive at a brighter future for ourselves, our children, and the next generation.”

Panelists from the U.A.E. Ministry of Energy and Infrastructure, Israeli Ministry of Energy, Israel Electric Corporation, Masdar Clean Energy, Honeywell, and GE Gas Power took the stage next to discuss the technological advancements powering a clean energy transition, the interplay between government and industry, and the potential for continued trilateral cooperation.

His Excellency Yousif Ahmed Al Ali, Undersecretary for Electricity, Water, and Future Energy at the U.A.E. Ministry of Energy and Infrastructure discussed the U.A.E.’s significant investments in clean energy and highlighted “first of their kind” projects that the government is undertaking.

Lior Schillat, Director General of the Israeli Ministry of Energy, expanded upon these sentiments and outlined Israel’s position as a driver of advancing clean energy technology. Israel set a goal to make 30% of its energy consumption “clean” by 2030 and, like the U.A.E., reach a net zero target by 2050.

Mohammad Abdelqader El Ramahi, Director, Asset Management and Technical Services at Masdar Clean Energy, discussed the innovative technologies being developed in the U.A.E. by Masdar and other U.A.E. institutions. El Ramahi explained that, “technology allows us to compete favorably and reach new frontiers in advancing the use and efficiency of clean energy.”

Joe Anis, President & CEO EMEA for GE Gas Power, shared the cutting-edge technologies introduced by GE and how they are contributing to regional energy goals. GE’s Haliade-X offshore wind turbine, for example, is the world’s most powerful offshore turbine and will support cost-effective clean energy needs in the region. In Israel, GE has installed world-class gas turbines with 64% efficiency, which has drastically reduced the amount of CO2 in the air. Joe explained that the switch from coal to gas in Israel potentially removes 4 million tons of carbon out of the atmosphere which roughly equates to taking one million cars off the road. A similar project in the U.A.E. is now underway.

Norm Gilsdorf, Vice President Global High Growth Regions and President of the ASEAN Region for Honeywell International, provided insight into Honeywell’s forward-looking approach to advancing clean energy. Notably, he explained that Honeywell spends half of its R&D budget on projects that help customers utilize energy more efficiently. Its net zero carbon refrigerant is just one example of the resulting innovation. Honeywell is also focused on moving the production of blue hydrogen forward, enabling carbon capture and storage, and advancing the use and efficiency of green jet fuel and green diesel.

Panelists also engaged in discussion about the important ways in which innovative companies in the U.S., U.A.E., and Israel are joining forces with government ministries to advance clean energy goals through the adoption of hydrogen, solar, and wind energy. Water use remains another key area in which trilateral cooperation is poised to drive change.

This luncheon discussion is the first in a series of events at Expo 2020 Dubai highlighting trilateral U.S.-U.A.E.-Israel cooperation emerging from the Abraham Accords Agreement. To learn more about the U.S.-U.A.E. Business Council’s Expo 2020 Dubai programming, please contact Graham Reitman at greitman@usuaebusiness.org.