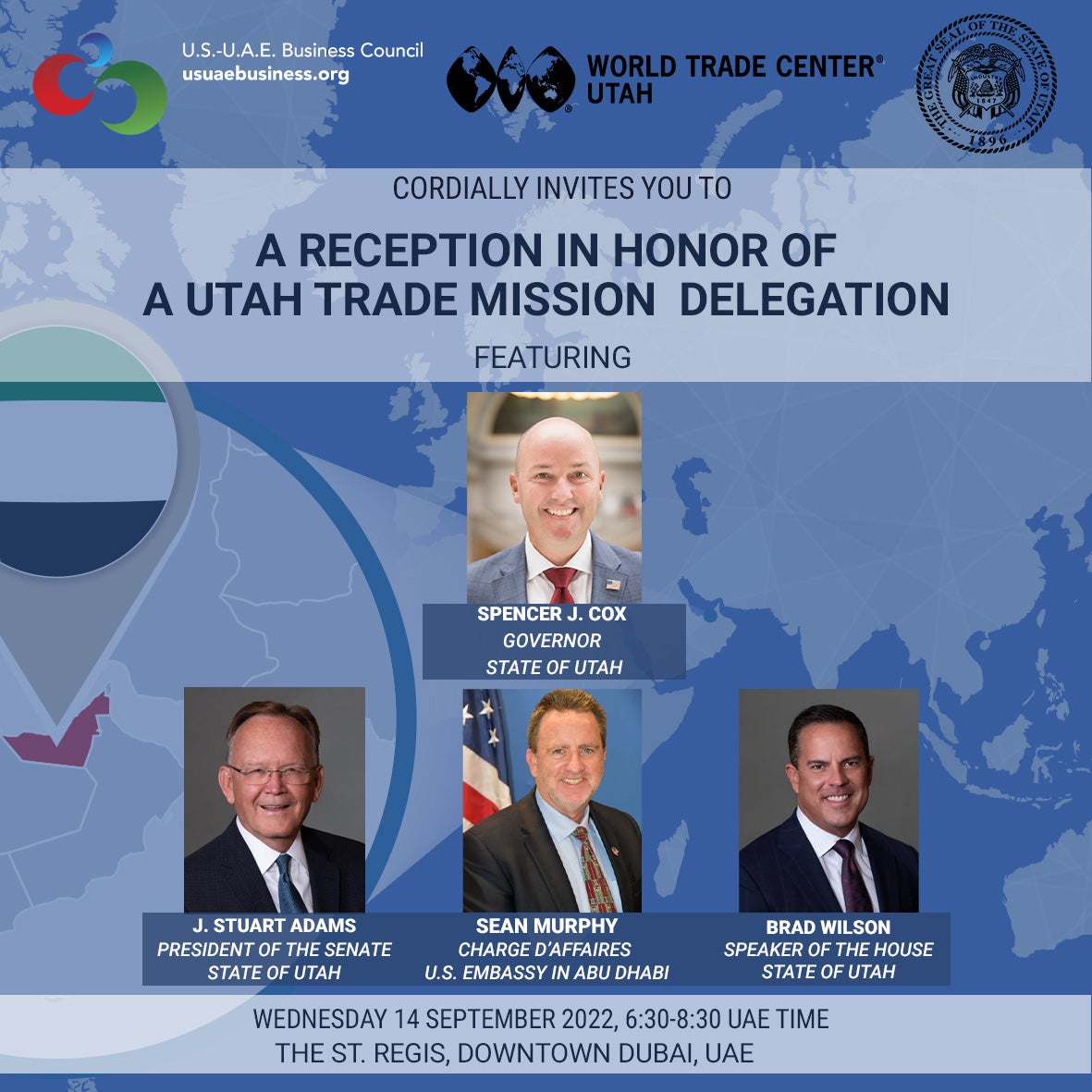 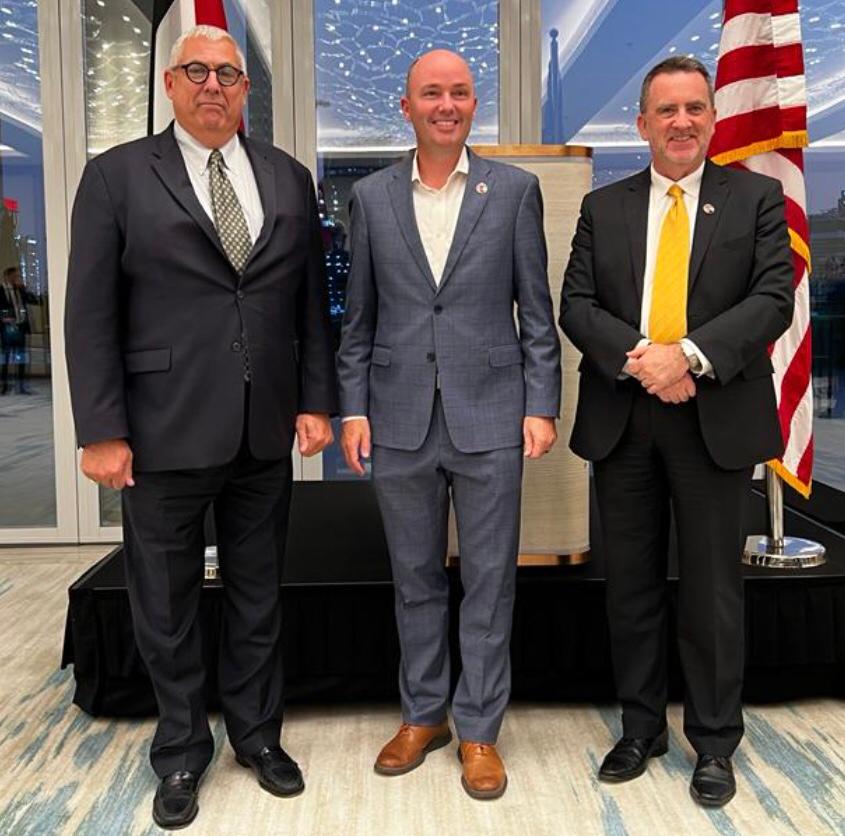 The U.S.-U.A.E. Business Council, the State of Utah Governor’s Office of Economic Opportunity, and World Trade Center Utah hosted a reception in honor of a visiting trade delegation from Utah on 14 September in Dubai. Led by Governor Spencer J. Cox, the delegation included over 60 prominent Utah government officials, business executives, and community leaders, including First Lady Abby Cox, House Speaker Brad Wilson, and Senate President J. Stuart Adams. During the reception, the delegation made and deepened U.A.E. connections, and opened the door for future collaboration with nearly 100 businesspeople from both the United States and the United Arab Emirates.
The Utah delegation arrived in the U.A.E. following five days in Israel, where the group explored the great potential for bilateral and importantly trilateral cooperation among U.S., U.A.E., and Israeli companies, the Utah delegation has been discussing collaborations with both U.A.E. and Israeli leaders to unlock the enormous opportunities created by the Abraham Accords. In the U.A.E., the delegation has spent a day and a night in Dubai, and a day in Abu Dhabi meeting with senior government and business leaders alike. 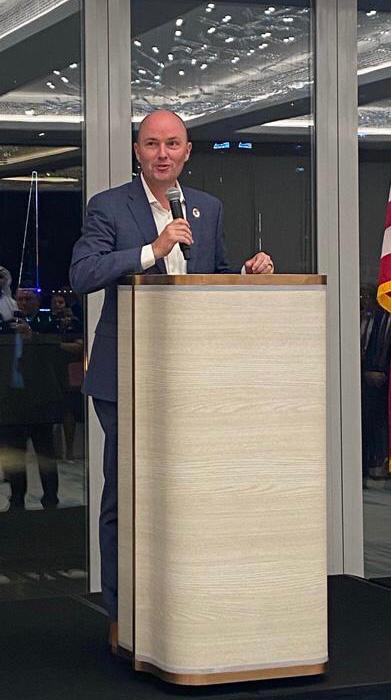 In his keynote remarks, Governor Spencer J. Cox highlighted the budding Utah-U.A.E. relationship, emphasizing that the delegation and trade mission sought to increase trade relations between the U.A.E. and the fastest growing U.S. state per capita. The governor noted the two year anniversary of the Abraham Accords, and spoke about the importance of the Abraham Accords in increasing trade and cooperation between the U.S., the U.A.E., and Israel. He also thanked businesses in attendance at the reception for their commitment to expand the U.S.-U.A.E. bilateral relationship. 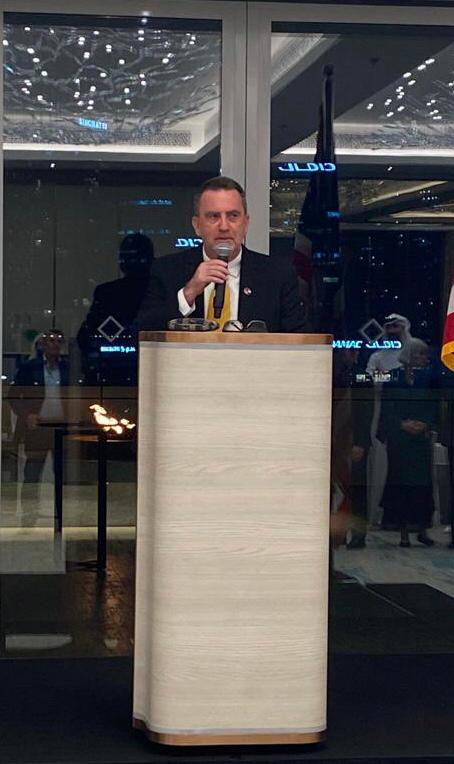 U.S. Embassy Abu Dhabi Chargé d’Affaires Sean Murphy lauded the delegation for taking advantage of the vast potential for business in the U.A.E. He further emphasized the opportunities for U.S.-U.A.E. businesses to innovate together to further grow trade relationships with states like Utah, noting the variety of innovative businesses in the room.  The lure of the U.A.E.’s business culture and friendly investment environment, combined with Utah’s demonstrated history of innovation, is sure to bring about a meaningful partnership.

Over the course of two days in the U.A.E., the delegation had a full agenda of meetings with key U.A.E. government officials and business organizations as well as cultural activities.  In order to maximize the outcomes of this visit, the delegates were broken into specific tracks that match delegates’ specialties. This included one track dedicated to healthcare and life sciences, and another dedicated to aerospace and defense, and others focused on common challenges, such as transportation and water security.  All these tracks were aimed at sharing experiences and best practices and exploring business opportunities specific to these dedicated sectors. Delegates also interacted with interfaith and community leadership.