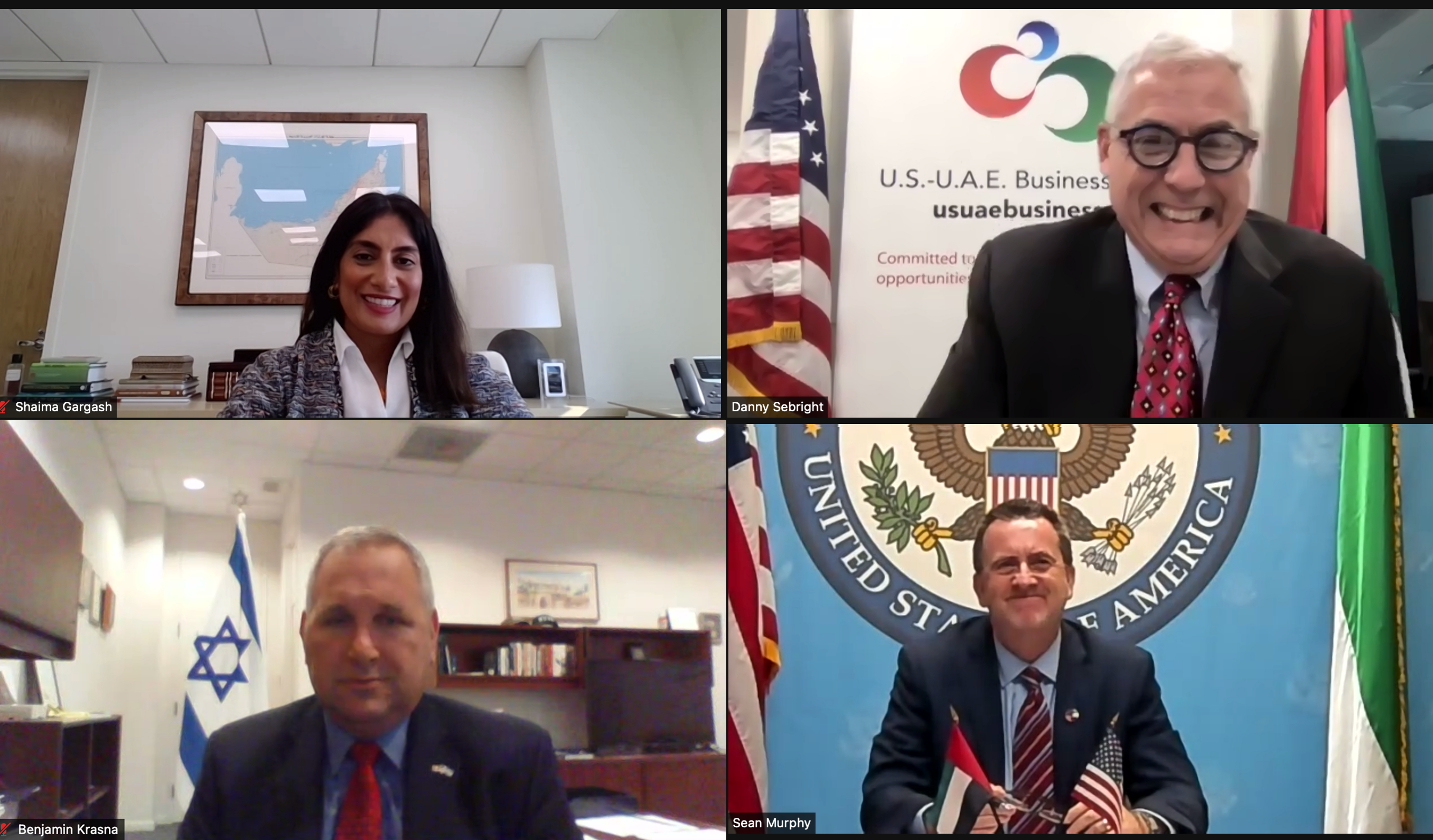 Leaders from the U.S., U.A.E., and Israel discussed the continued evolution of trilateral U.S.-U.A.E.-Israel business and people-to-people ties one year after the signing of the Abraham Accords during a U.S.-U.A.E. Business Council webinar moderated by President of the Business Council, Danny Sebright. A video of the webinar, which took place on September 14th, 2021, can be found here.

Shaima Gargash, Deputy Chief of Mission at the U.A.E. Embassy in Washington D.C., provided an overview of the ways in which U.A.E.-Israel ties have evolved in the past year. Ms. Gargash noted the opening of an Israeli Embassy in Abu Dhabi and a U.A.E. Embassy in Tel Aviv, a development which has been met with broad bipartisan support in Washington, D.C. On the business front, she stressed that “the U.A.E. and Israel are only at the beginning,” with over 60 MoUs signed to date and U.A.E.-Israel trade forecasted to create over $1 trillion in value over the next decade.

Benjamin Krasna, Deputy Head of Mission at the Embassy of Israel in Washington D.C., expanded upon these sentiments, stating that “the remarkable has become the new normal.” Thus far, over 14 official agreements have been signed between the U.A.E. and Israel, and another 20 are in the works. In only one year, he explained, there are already regular flights between Tel Aviv and Abu Dhabi with tourist traffic flowing regularly. Mr. Krasna also emphasized that the U.A.E. created momentum for Bahrain and Morocco to also normalize relations with Israel, paving the way for greater cooperation and peace in the region.

Sean Murphy, Chargé d’Affaires at the U.S. Embassy in Abu Dhabi, remarked that this has been a “rewarding year.” Like Mr. Krasna, he referred to the U.A.E. as a regional trailblazer for its role in generating positive movement toward a warmer peace in the region. Watching the signing of the Abraham Accords unfold, he said he “could feel a page in the history of the region being turned.”

Turning to the implications of the Abraham Accords for businesses, Mr. Krasna explained that the signing of the deal “opened the floodgates” for Israeli businesses to expand to the U.A.E. after years of under-the-radar cooperation. He pointed out that the U.A.E. is forward-thinking and has been eager to tap into Israel’s advanced technology through investment and new partnerships. Beyond Israel and U.A.E. ties, the deal has brought Israel closer to the east and the U.A.E. closer to Europe and the Mediterranean. Mr. Krasna shared that Israel soon hopes to have a free trade agreement with the U.A.E., as it already does with the U.S.

Ms. Gargash shared that U.A.E. businesses have now been able to tap into a new market and explore new avenues in innovative sectors in which Israel has expertise including cyber, AI, advanced technology, and smart agro-technology, as well as technology addressing water scarcity. She explained that in creating jobs, opportunities, and stability, the business ties emerging from the Abraham Accords support the U.A.E.’s economic diversification goals. With the U.A.E. being only 50 years old as a country, she said there is “still a lot of potential for the U.A.E. to grow into,” and this deal will support the realization of that economic potential.

Mr. Murphy commented on the significance of these burgeoning ties for U.S. economic interests. Because Israel and the U.A.E. are both key Middle East trading partners for the U.S., this agreement has generated new opportunities and freer movement of people and goods in the region. He referred to the Abraham Accords as a “gamechanger” in the extent to which they have enhanced efficiency for U.S. businesses in the region.

Panelists also remarked on trilateral defense cooperation. Mr. Krasna cited a new space agreement between Israel and the U.A.E. as just one example of growing relations, while Ms. Gargash explained that as a small country, the U.A.E. welcomes collaboration to stabilize the region.

The conversation wrapped up with a discussion of Expo 2020 Dubai. Ms. Gargash brought attention to the alignment between the Abraham Accords and Expo’s theme of “connecting minds, creating the future.” Mr. Krasna recognized the U.A.E. as “forward-thinking” for including an Israeli Pavilion even ahead of the signing of the Abraham Accords. This move, he remarked, was a powerful indicator of the direction of the relationship. Israel very much looks forward to showcasing its multicultural society and technological innovation at Expo. Likewise, Mr. Murphy shared a few highlights from the U.S. Pavilion including exhibits, a program of cultural activities, and U.S. National Day at Expo on November 28th.

Drawing on the momentum of the Abraham Accords, the U.S.-U.A.E. Business Council will host three trilateral U.S.-U.A.E.-Israel events at Expo 2020 Dubai in addition to a series of thematic business panel luncheons, which will be held at the U.S. Pavilion. For more information about upcoming programming, please contact Mary Zuccarello at mzuccarello@usuaebusiness.org.