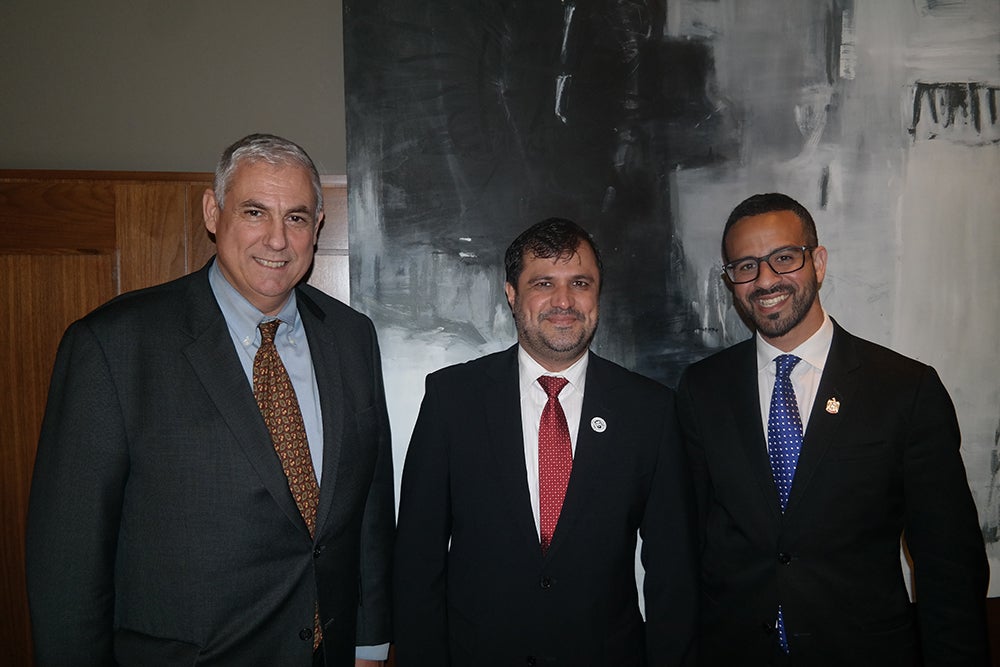 The U.A.E. Embassy’s Trade and Commercial Office and the U.S.-U.A.E. Business Council jointly hosted a private dinner in Washington, D.C. on Tuesday October 9th in honor of a visiting U.A.E. delegation to the 2018 AUSA Annual Meeting and Exposition.

This dinner provided an opportunity for senior executives from key U.S. defense and security companies that are members of the Business Council to welcome the U.A.E. delegation to Washington, D.C. and help build meaningful partnerships in the defense industrial sector. After brief introductory remarks and thanks by U.A.E. Commercial Attache Saud Al Nowais, His Excellency Tareq Al Hosani thanked everyone for attending, saying he looked forward to taking existing relationships “to the next level.” He also remarked that he looks forward to unveiling a new U.A.E. defense industrial offset policy during IDEX 2019. His Excellency noted that key provisions of the U.A.E.’s new draft offset policy will be shared in advance with industry for comment.

Remarking on the event, U.S.-U.A.E. Business Council President Danny Sebright said, “The presence of so many distinguished Emirati and U.S. officials and business leaders in this room is a testament to the strength and depth of the U.S.-U.A.E. defense relationship, which has contributed immeasurably to the security of both countries as well as the wider Middle East region.” Mr. Sebright thanked the U.A.E. military members present in the room for their service and for fighting side by side with U.S. forces in this regard.

The U.S.-U.A.E. defense and security relationship is marked by deep military and intelligence cooperation, regular joint exercises and training, billions of dollars of arms sales, and the stationing of thousands of U.S. military personnel in the U.A.E. U.A.E. naval ports at Jebel Ali and Khalifa Port continue to be the largest ports of call for the U.S. navy outside of the United States.

The U.A.E. is the only Arab country to have participated in six coalition actions with the United States since the First Gulf War, underscoring how the U.A.E. has become not just a consumer of security but also a provider of security and a key U.S. partner in a dangerous and volatile region.

In May 2017, the U.S. and U.A.E. signed a new Defense Cooperation Agreement so as to better reflect the broad range of military-to-military cooperation that the U.A.E. and U.S. enjoy today. This agreement demonstrates the United States’ long-standing commitment to the security and stability of the U.A.E. and the Arabian Gulf.

For more information about the U.S.-U.A.E. defense and security relationship, please click here