Minister for Government Development and the Future Emphasizes the U.A.E.’s Pioneering Spirit 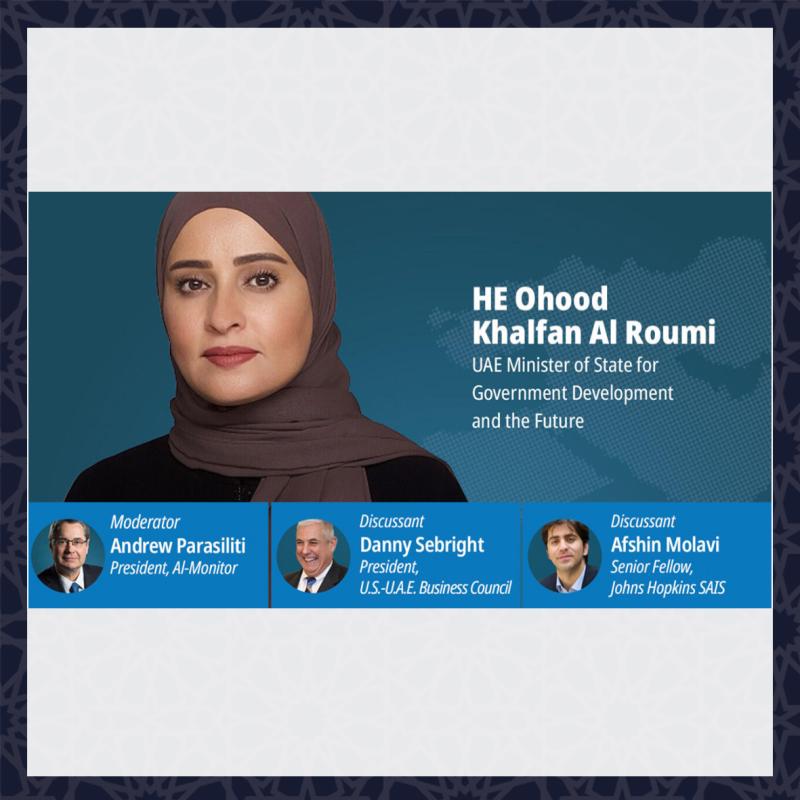 H.E. Al Roumi provided a brief overview of the “Projects of the 50,” a series of developmental and economic projects and reform efforts aimed at jump starting the U.A.E. society and economy in attracting new talent and investors. In realizing these ambitious aims, she pointed to the Emirates’ ability to leverage a young workforce, attract global and local talent, and shift to a digitally-focused economy.

Minister Al Roumi emphasized that the social reforms of the Projects of the 50 will allow the U.A.E. to fulfill their goal of becoming a “humanitarian force for good and stability in the world”. Acknowledging that the U.A.E.’s regional and global leadership must begin first and foremost with Emirati youth, Her Excellency discussed the NAFIS plan, which aims to create 75,000 new jobs in the private sector. The program seeks to advance the U.A.E.’s competitive edge when it comes to young human capital, which Minister Al Roumi noted is crucial in creating STEM and tech-focused “jobs of tomorrow.”

Her Excellency also noted that the U.A.E. will need to attract a best-in-class workforce to achieve the U.A.E.’s goal of doubling the economy by 2050. She pointed to the Emirates’ visa reforms, most notably the Golden Visa program, which she believes will allow the U.A.E. to bring in diverse talent and lead global initiatives on climate change, transportation infrastructure, healthcare, and space exploration. The welcoming tech-friendly environment for professionals will also play a major role in turning twenty percent of the U.A.E.’s economy digital over the next ten years. As a result of the Projects of the 50, Minister Al Roumi noted that the U.A.E. will take advantage of the “continuous rise in hyper-connectivity between governments and political systems” and will certainly seek new partnerships along the way.

Discussants Danny Sebright and Afshin Molavi joined H.E. Al Roumi and Al-Monitor President Andrew Parasiliti Later in the webinar, Danny Sebright highlighted that U.S. business applauds the Projects of the 50, and sees the U.A.E. as the next global powerhouse alongside Singapore, Seoul, and Paris. He further noted that the U.A.E. has created an ecosystem in which global talent will thrive, opening the door for new U.S.-U.A.E. partnership in areas such as rail transportation and tech innovation. With the economic and social reforms slated to be achieved over the next few decades, U.S. industry is presented with the opportunity to “not only access Gulf markets, but global markets.”

Afshin Molavi emphasized that this shift to become a universal hub is even more profound than one may initially understand. The U.A.E. will create a powerful “before and after picture” in terms of infrastructure and development, but it will also show its greatest gains via human capital and development, women’s empowerment and education, and the creation of innovation ecosystems. Molavi praised the U.A.E. for quietly transforming, citing these crucial changes as the basis of the U.A.E.’s successes.

Noting Minister Al Roumi’s unique and far-sighted portfolio, Al-Monitor Andrew Parasiliti concluded the event by thanking Her Excellency for shedding light on pioneering reforms which are “true to tradition yet look toward the future.”
To watch the full recording of this webinar, please click above or here.