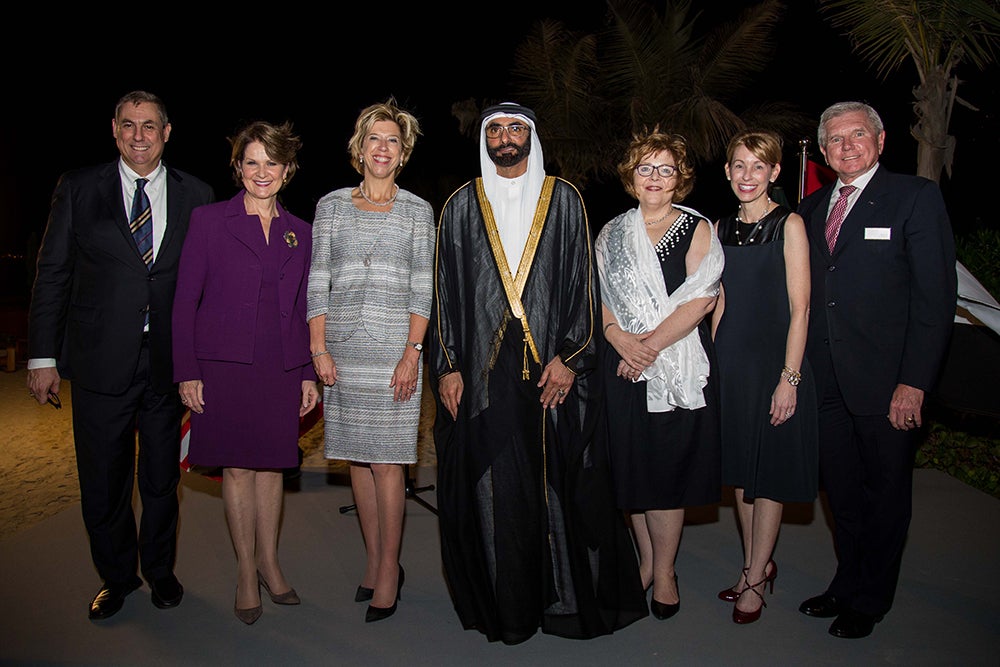 Mr. Robert Durbin, Chief Operating Officer of the Aerospace Industries Association and Mr. Danny Sebright, President of the U.S.-U.A.E. Business Council, provided brief welcoming remarks before introducing the speakers. In his remarks, Mr. Durbin highlighted the importance of the partnership between the U.S.-U.A.E Business Council and the Aerospace Industries Association in advancing the American aerospace and defense industry’s role in the U.A.E. “The Dubai Air Show provides aerospace and defense companies the opportunity to demonstrate U.S. leadership in the global economy, and the fact that we are the reliable partner of choice in a contested and competitive marketplace. AIA is proud to be here supporting our member companies, and to continue advocating policies that enable our country to extend economic and security cooperation to close friends and strong allies like the U.A.E.”

Mr. Sebright continued to set the stage for the theme of the evening by first congratulating Boeing for its landmark sale of 40 787 Dreamliners at a list price of $15.1 billion to Emirates Airline. Sebright heralded the impact of this sale, which will lead to 80,000 new jobs in the U.S. Sebright then outlined key steps that would facilitate even closer defense and security cooperation. He called for the U.A.E. to establish a “Defense Technology Security Administration-like entity to centralize in one place the U.A.E.’s review and careful protection of classified and sensitive defense and security technology and information.” On the American side, Sebright asked for yet more review of the United States’ ITAR and release policy for the U.A.E. Finally, Sebright said that both sides should strive to construct a more nimble and effective defense industrial policy that once and for all is creative in its approach to defense offsets.

Ms. Marillyn A. Hewson, Chairman, President, and CEO of Lockheed Martin Corporation, picked up on the theme of partnership, saying, “As the U.S. and U.A.E. confront evolving challenges across the Gulf region and around the world, the relationship between our two nations is more vital than ever before.” Hewson continued, “Lockheed Martin is proud to partner with the U.A.E. to help keep their citizens safe and promote regional stability, while also advancing educational opportunities and industry partnerships that benefit both countries.”

In this vein, Ms. Leanne Caret, Executive Vice President of The Boeing Company and President and CEO, Defense, Space, and Security, added, “the U.A.E. is a valued partner, and we’re committed to strengthening that important relationship to guarantee long-term success for us all. Our nations must continue to embrace reforms and policies that make it easier to do business with one another.”

Ambassador Barbara A. Leaf then provided insight into the United States’s increased participation at this year’s Airshow. She said, “The ever-growing understanding within the U.S. business community that its prosperity can increase by partnering with the U.A.E. – particularly in an innovative and high-tech sector like aerospace – led over 118 U.S. firms to participate in this year’s Dubai Air Show, including two dozen American firms in the U.S. pavilion who are new to the Show. I am proud to say that the relationship is stronger and more vibrant than ever, demonstrated by our participation in the Dubai Air Show, and I am honored to have had the high privilege to have contributed to that relationship by working with you all.”

In keynote remarks, U.A.E. Minister of State for Defense Mohammed Al Bawardi gave a very clear statement of the threats posed by Iran in the region, from Yemen to Iraq, Syria, and Lebanon. The Minister underscored the hegemonic goals and ambitions in Iran’s destruction behavior. The Minister praised the importance of U.S.-U.A.E. security cooperation as a bulwark against Iran’s aggressive actions. The Minister said there are many more areas in which U.S.-U.A.E. defense and military cooperation can grow and that he is committed to pressing forward and to deepening and building ties in the near future, including at the next meeting of the joint military dialogue in Washington, D.C.

Under Secretary of Defense for Acquisition, Technology, and Logistics (ATL) Ellen Lord focused her keynote remarks on the importance of partnership. She stressed that the U.A.E. has already become one of if not the most capable partner in the Gulf region. However, she also emphasized there was much more to do together, particular in the areas of joint training of personnel and the development of technology in joint R&D. Lord said, “As the United States is the world leader in aircraft and aerospace engineering, we look forward to expanding our very strong ties in aviation and aerospace, particularly as the U.A.E. gears up its space program.”

Mr. Sebright and Mr. Durbin concluded the evening by wishing all participating American and Emirati companies a successful Airshow and thanking the distinguished speakers for their time.

The Dubai Airshow is a biennial show held in Dubai that began in 1986 and evolved to become one of the largest and most important aerospace events in the world. In 2015, the Airshow hosted 1,103 exhibitors from 63 countries and welcomed over 66,346 trade visitors and 1,296 international and regional media.