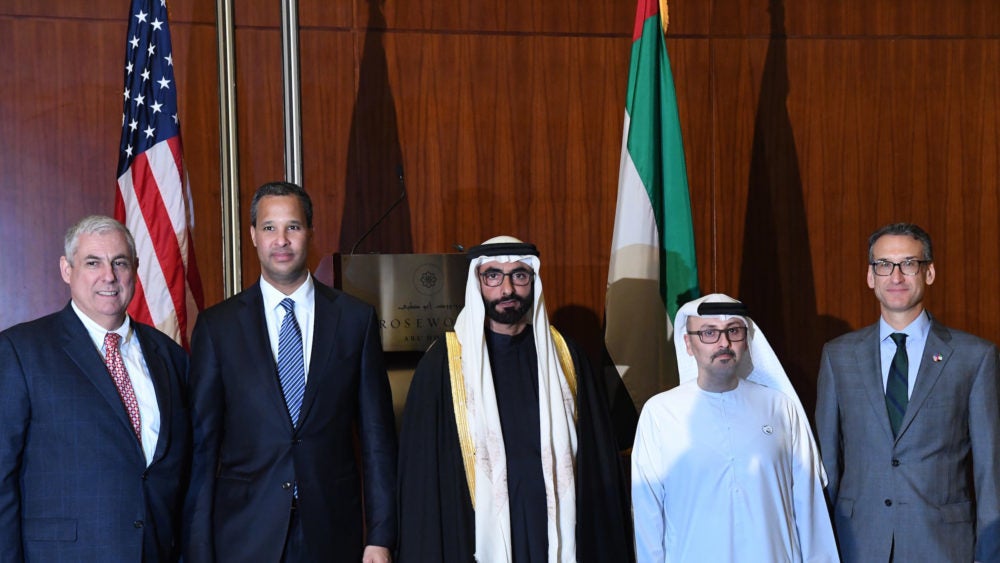 Mr. Danny Sebright, President of the Business Council, opened the program, highlighting the importance of the U.S. and U.A.E.’s longstanding defense and security relationship. Mr. Sebright continued, “2019 is officially the Year of Tolerance in the U.A.E. With the recent visit of the Pope, next month’s Special Olympics World Games being hosted in Abu Dhabi, the construction of the first Hindu Temple in Abu Dhabi, and new measures to foster interfaith dialogue among all of the world religion’s, the U.A.E. sets an example not only in the region, but the world.” H.E. Al Muhairi, noted, “The U.A.E. and U.S. continue to work together to bring peace, stability, and prosperity to the region. From a defense perspective and as published in a recent report by the U.S.-U.A.E. Business Council, the U.A.E. has shown renowned emphasis on the development of its national defense industrial base.”

“The U.A.E. has long sought to become more self-sufficient in meeting its aerospace and defense needs by investing heavily in domestic capabilities and, through offsets, forging strategic partnerships with some of the biggest and most respected multinational companies in these industries.”

Mr. Allen then thanked the Business Council for its efforts promoting the U.S.-U.A.E. relationship, noting, “Boeing is proud to work with the U.A.E. Armed Forces and offer them a robust portfolio of products and services to build their defense and security capabilities. On the eve of the 2019 International Defense Exhibition and Conference, we appreciate the Business Council’s efforts in creating opportunities like this to hear from U.A.E. government leaders such as His Excellency Mohammed bin Ahmed Al Bowardi, Minister of State for Defense Affairs.”

Subsequently, Mr. Steven Bondy, Chargé d’Affaires, U.S. Embassy in Abu Dhabi and Ms. Jennifer Zakriski, Principal Director, OSD Middle East Policy, U.S. Department of Defense took the stage to offer the U.S. Government’s perspective on recent developments in the bilateral relationship. Remarking on the auspicious occasion, Mr. Bondy expressed, “The people here are the foundation of the U.S.-U.A.E. relationship. The U.S. is proud to partner with the U.A.E., one of the most capable militaries in the region. The U.A.E. is amongst the countries that the U.S. turns to first when confronting regional challenges. The U.A.E. is a most welcoming, friendly, and supportive country for the over 5,000 U.S. service members posted here.”

Meanwhile, Ms. Zakriski commented that, “as our National Defense Strategy notes, the U.S. strategic advantage lies with its partners and allies. It is in our national interest to be the U.A.E.’s preferred partner in this era of great power competition.”

Delivering the keynote address, U.A.E. Minister of State for Defense Affairs, His Excellency Mohammed Al Bowardi praised the importance of U.S.-U.A.E. security cooperation. Remarking that, “the U.S. was the third nation to formally recognize the establishment of the U.A.E. as a sovereign nation in 1971. This diplomatic gesture of goodwill has blossomed into a solid multi-dimensional relationship that has transformed the U.A.E into one of America’s most important allies. Indeed, our shared history has fostered a bond of true friendship that still thrives today.”

H.E. Al Bowardi noted that, “the U.A.E. and the U.S. also work closely in the areas of peace and security. We are partners in the in the fight against Daesh, partners in NATO, and we stand shoulder to shoulder in Afghanistan. The U.A.E. is the only country in the Middle East, and one of three worldwide, that has participated with the U.S. in 6 coalitions over the last 20 years (Afghanistan, Libya, Somalia, Bosnia-Kosovo, the 1990 Gulf war and the ongoing fight against Daesh).”

As closing words, the Minister offered, “U.S. participation in IDEX is a testimony of our strong partnership, and the U.S. is a major contributor to the success of this multinational exhibition and international defense platform.”

Subsequently, Mr. Sebright concluded the evening by wishing the assembled guests a successful IDEX and thanking the distinguished speakers for their time