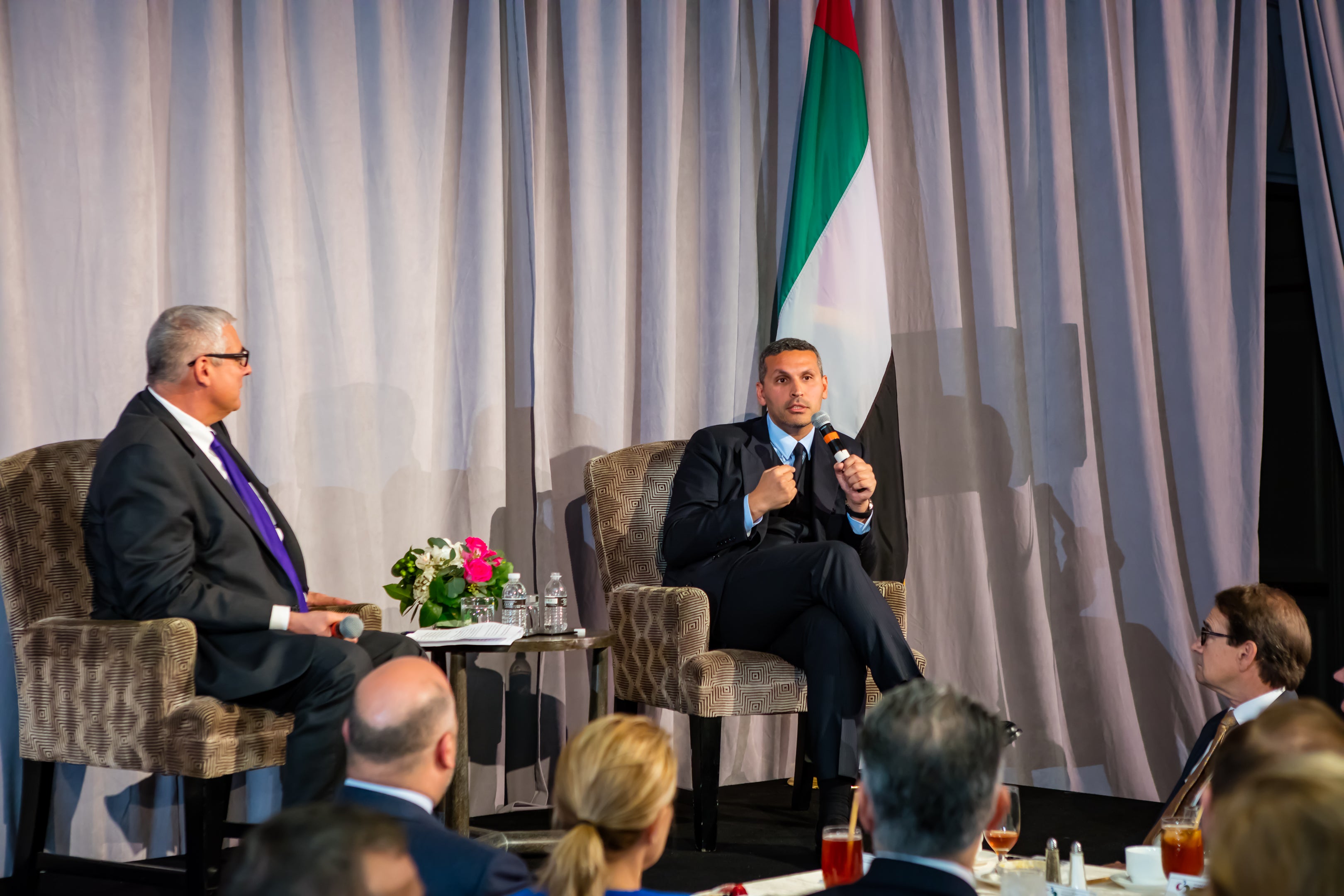 During the subsequent fireside chat, Mr. Sebright invited His Excellency Al Mubarak to answer a number of questions about the U.S.-U.A.E. relationship and to discuss Mubadala’s investments in the U.S. and its future investment strategy. A highlight of the discussion was Mubadala’s landmark investment in GLOBALFOUNDRIES, the largest privately held semiconductor company and second largest semiconductor foundry in the world. GLOBALFOUNDRIES is also a major source of technology for the U.S. Department of Defense and is the only U.S. based, pure-play foundry producing advanced nodes.

His Excellency proudly detailed Mubadala’s investments in GLOBALFOUNDRIES’ Fab 8, which is the world’s most sophisticated semi-conductor manufacturing facility. The FAB 8 site, which is located in Malta, New York, represents approximately $15 billion in private and public investment, creating approximately 3,500 high-paying jobs at the facility and supporting an additional 15,000 indirect jobs and thousands more induced jobs in the region. Fab8 is the largest private investment in New York State’s history and has completely transformed the regional economy and education system.

His Excellency Al Mubarak also discussed Mubadala’s recently completed merger with IPIC and imminent merger with Abu Dhabi Investment Council, Mubadala’s efforts to diversify the U.A.E. economy through strategic investments at home and abroad, and Mubadala’s other investments into the United States including NOVA Chemicals, a wholly-owned subsidiary that operates a plant in Geismar, Louisiana that produces petrochemicals used in a wide range of products. His Excellency Al Mubarak said, “the close security, trade, and investment relationship between the U.S. and the U.A.E., is a cornerstone of the U.A.E.’s long term strategy for the future. Mubadala has over $100 billion in investments in the U.S. market and will continue to grow its portfolio here. Partnerships with American companies are key to our success for the future and we will continue to expand in high tech and related verticals.”

In addition, His Excellency Al Mubarak spoke more broadly about the U.A.E.’s investments in the U.S., which have provided thousands of high-skilled, high-paying American jobs. For instance, Gulftainer, a global port operator headquartered in the U.A.E., won a 35-year concession to manage the Canaveral Cargo Terminal in 2014 and subsequently invested $100 million to both create a state-of-the-art container and multi-purpose cargo terminal and train local personnel. Gulftainer now plans to invest $580 million in the Port of Wilmington, Delaware after securing a 50-year concession for that port in 2018. Before opening the floor for questions from the audience, His Excellency discussed the opening of a Mubadala office in San Francisco. This office will oversee Mubadala Ventures Fund 1, a $400 million early growth venture capital fund with Mubadala and Softbank as the two main investors that will invest in disruptive technology investments, including artificial intelligence and biotechnology, mostly around Silicon Valley.  This office will also oversee a $200 million Fund of Funds that will invest in both established and emerging fund managers, and it will oversee and manage Mubadala’s $15 billion commitment to the SoftBank Vision Fund.

Following His Excellency’s remarks, Mr. Sebright observed, “Year after year, the U.A.E. continues to hit its diversification strategy targets and Mubadala is by far one of the largest and most important contributors to the strategy’s success. In order to do so, Mubadala has looked toward reliable and capable partners in the U.S. for help and for several decades, U.S. public and private-sector stakeholders have answered the call.”

Before concluding the afternoon’s luncheon, Mr. Sebright highlighted the U.S.-U.A.E. Business Council’s newly released “Doing Business in the United Arab Emirates” guidebook, which provides American companies interested in expanding their operations in the U.A.E. with the essential information they need to get started. He then thanked the audience and gave a special thanks to His Excellency Al Mubarak, His Excellency Al Muhairi, and the Mubadala delegation.

The delegation began their visit in New York and will continue to Louisiana, Texas, and California before returning to Abu Dhabi.