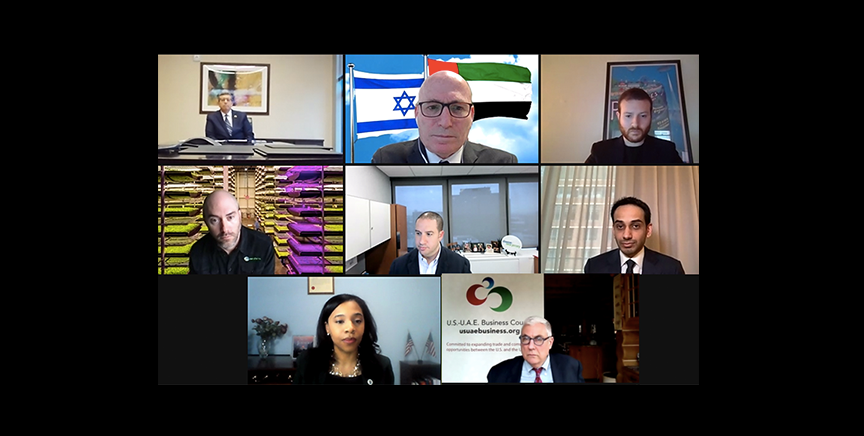 Officials from New Jersey, Israel, and the U.A.E. discussed opportunities for New Jersey businesses within the U.A.E., the historic Abraham Accords, and possibilities for trilateral cooperation during a webinar co-hosted by the U.S.-U.A.E. Business Council, Choose New Jersey, and the New Jersey Israel Commission. A video of the webinar, which took place on 24 March 2021, can be found here.

In conversation with U.S.-U.A.E. Business Council President Danny Sebright, Mark Levenson, Chair of the New Jersey-Israel Commission, noted that New Jersey and Israel have shared, on average, $1.3 billion per year in annual trade. Mark expressed his belief that trade between New Jersey and the U.A.E. could reach those same levels. Moreover, his colleague, New Jersey-Israel Commission Executive Director Andrew Gross, noted the “historic opportunity” to bring New Jersey, the U.A.E., and Israel together following the signing of the Abraham Accords.

New Jersey’s Secretary of State, the Honorable Tahesha Way, spoke of the importance of strengthening ties of friendship across the globe. She further noted that the U.A.E., Israel, and New Jersey are all the same size, and trilateral cooperation will allow all three entities to flourish. Secretary Way shared that New Jersey exported $753 million worth of goods to the U.A.E. last year, making New Jersey the 5th largest exporter to the U.A.E. among all U.S. states and making the U.A.E. the 15th largest international export market for New Jersey. Secretary Way echoed Mark’s sentiments on the New Jersey-Israel trade relationship, re-emphasizing the $1.3 billion total trade volume.

His Excellency Abdalla Shaheen, U.A.E. Consul General in New York, provided an overview of the historic partnership between the U.S., U.A.E., and Israel.  His Excellency explained that the U.A.E. trades with all 50 U.S. states, the U.A.E. is the largest destination for U.S. exports in the Middle East region, and over 1,500 U.S. firms are present in the U.A.E. His Excellency discussed the U.A.E.’s ties to New Jersey in particular, including its support in the wake of Hurricane Sandy. Touching on the signing of the historic Abraham Accords, His Excellency called the signing of these Accords a “major win” not only for the two countries involved, but for the future of the region as a whole. His Excellency noted that this signing is a testament to the U.A.E.’s belief that “like-minded countries must work together to expand opportunity, security, and prosperity for everyone.” His Excellency also spoke about the U.A.E.’s Emirates Mars Mission, Abrahamic Family House, hosting of the Special Olympics, Covid-19 relief efforts, and Expo 2020 Dubai.

Booni Cohavi, Consul for Cultural Affairs in North America at the Consul General of Israel in New York, noted the “remarkable” relationship between the State of New Jersey and Israel. Booni noted the similarities between New Jersey and Israel, citing both entities’ similar size and shared spirit of innovation. Booni also shared that New Jersey Governor Phil Murphy, New Jersey Secretary of State Tahesha Way, Choose New Jersey, and the New Jersey-Israel Commission have all visited Israel in recent years. Booni called the signing of the Abraham Accords “ground-breaking,” adding he expects this development to “serve to advance stability and security across the Middle East.” Booni thanked the U.A.E. for its leadership in advancing peace within the region.

David Rosenberg, the CEO & Co-Founder of AeroFarms, shared AeroFarms’ experience as a New Jersey company that does business with the U.A.E. David commented on AeroFarms’ $100 million project in Abu Dhabi and how impressed he has been by his partners at ADIO and Dubai Holding, who “do what they say they will do.” He also noted the cultural similarities between New Jersey, the U.A.E., and Israel, saying that all three entities have the “spirit of let’s be first.”  David added that he particularly appreciates the U.A.E.’s focus on women in STEM.

During a subsequent discussion, Secretary Way elaborated on the similarities between Israel, the U.A.E., and New Jersey. She shared that, similar to how the U.A.E. is a regional hub, New Jersey is also a regional market hub connecting the tri-state area. Secretary Way remarked that New Jersey has a strong tourism sector, and that the state welcomed 116.2 million visitors in 2019 (pre-pandemic), with visitor spending reaching $46.4 billion. She spoke of opportunities for greater collaboration in the tourism sector, and she expressed enthusiasm for the resumption of flights between Newark and the U.A.E. (via Athens) in June.

When asked about how the U.A.E. is working to diversify its economy for the future, His Excellency Shaheen flagged the lessons the U.A.E. learned long ago about the dangers of economic dependence on just one industry or commodity (cultured pearls).  Moreover, he spoke about the U.A.E.’s efforts to build a knowledge economy and create jobs for youth through sectors such as renewable energy, agriculture, technology, and space exploration.

Booni noted that the pace of building new partnerships between the U.A.E. and Israel has been very quick, citing an enormous potential for commercial opportunities between the two nations. Booni also commented that that while the government built the framework for this cooperation, the people and community leaders must fill the frame with substance so that all who participate will get the intended benefit. Citing the extensive commercial and personal exchanges he has witnessed between the U.A.E. and Israel thus far, Booni called the Abraham Accords the “real thing.”

Jose noted that the U.A.E., Israel, and New Jersey are not only the same size but they all “punch above their weight.” He remarked that while Israel is the “startup nation” and the U.A.E. is the “scaleup nation,” New Jersey is the “state of innovation.”  He further suggested the most opportune area for collaboration between New Jersey, the U.A.E., and Israel is within the life sciences. Jose said that New Jersey is known as the “medicine chest of the world,” and he cited how involved New Jersey has been throughout the COVID-19 pandemic. Coupling this with the talent within the U.A.E. and Israel, Jose offered that this may be the most “synergistic” area for cooperation between the three entities. He also offered clean energy as another area for trilateral cooperation.