“Projects of 50,” Expo 2020, and Sustainability Figure Prominently in U.S.-U.A.E. Business Council Board Meeting 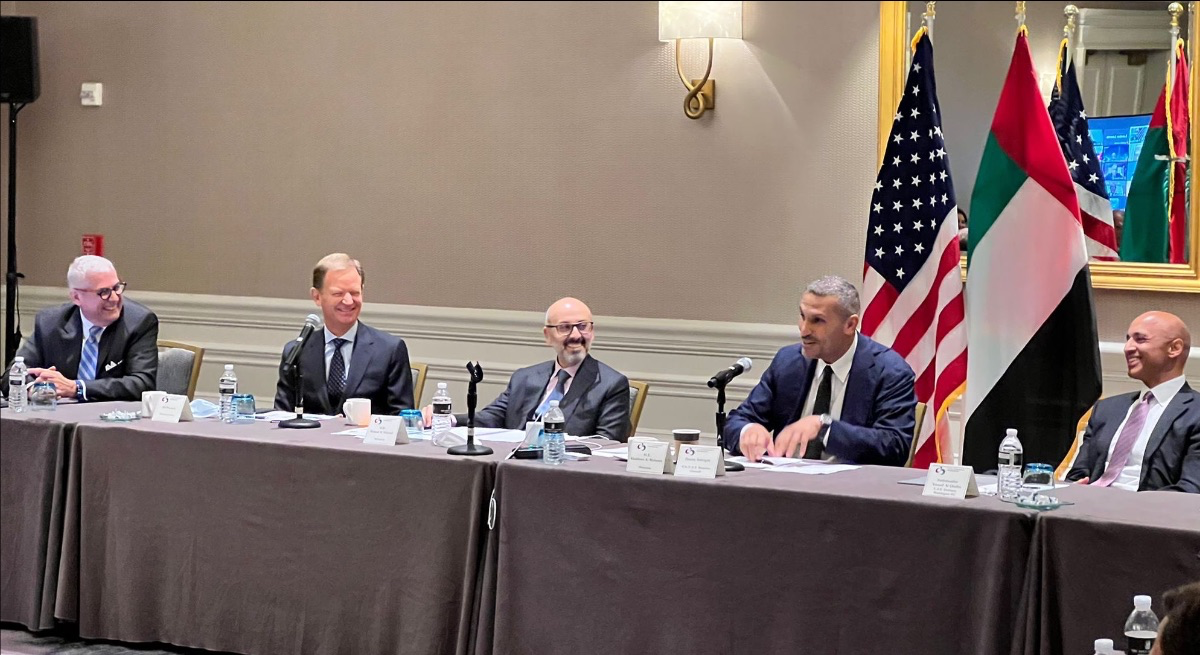 The U.S.-U.A.E. Business Council hosted its 14th annual Board of Directors meeting on October 7th 2021 at the Ritz Carlton in Washington, DC under the co-Chairmanship of H.E. Waleed Al Muhairi, Deputy Group CEO of Mubadala Investment Company, and, for the first time, Dr. Tomislav Mihaljevic, CEO and President of Cleveland Clinic.  This year’s meeting welcomed Hana AlRostamani, Group CEO of First Abu Dhabi Bank, as co-Vice Chairman of the Council, and 8 new members of the Board: Abu Dhabi Investment Office, Amazon, Bank of America, Citi, Google, NYU Abu Dhabi, Viatris, and Cleveland Clinic. It also featured special remarks by H.E. Ambassador Yousef Al Otaiba, Charge d’Affaires Sean Murphy, and H.E. Khaldoon Al Mubarak, the Managing Director and Group CEO of Mubadala Investment Company and the first co-Chairman of the U.S.-U.A.E. Business Council when it was created in 2007.

His Excellency Waleed Al Muhairi, Deputy Group CEO of Mubadala Investment Company and Co-Chairman of the Business Council’s Board of Directors, provided scene setting remarks, commending the Business Council for its resilience during the Covid-19 pandemic and its effectiveness in providing “value” and “impact” over the past year. He then spoke about the “shared vision of commercial prosperity between our two countries” and how to strengthen from a commercial perspective the “unique bond that binds our two countries together.”

H.E. Waleed expressed “pride” in Mubadala’s investments of over $100 billion in the United States. Moreover, he stressed this substantial investment is “based on a belief that the U.S. continues to offer an unparalleled range of investment opportunities across a variety of sectors and across different elements of the value chain.” It is also “based in a belief that competition and innovation are going to be dominant forces propelling the U.S. economy forward and encouraging an entrepreneurial mindset in fostering world-leading companies that will always be found at the forefront of technological development and advancement.”

Commenting on the U.A.E.’s upcoming Golden Jubilee, he remarked, “While the accomplishments of the last 50 years are impressive, there is an expectation and determination on the ground that the next 50 years will in many ways surpass the first 50.” He highlighted the “Projects of the 50” plan, whereby the U.A.E. government is announcing 50 programs that will accelerate the U.A.E. economy over the next 50 years, such as the allocation of 100,000 visas for coders and a new “green visa” for investors and entrepreneurs. He also highlighted Expo 2020 Dubai, which opened earlier this month, and the U.A.E.’s recent net zero commitment, which was accompanied by a $165 billion commitment to invest in clean energy by 2050.

Dr. Tomislav Mihaljevic, CEO and President of Cleveland Clinic, expressed how honored he was to co-host his first Board Meeting as co-Chairman of the U.S.-U.A.E. Business Council’s Board of Directors. He then spoke of the opportunity for the Council to foster “healthcare and research collaborations” between the U.S. and U.A.E. that will strengthen our collective response to a future pandemic that will “inevitably come.” He poignantly advocated for changing the way we think about investments in medical research and equate them to the type of investment we put in national security.

Hana Al Rostamani, Group CEO of First Abu Dhabi Bank (FAB), remarked that she was “pleased and honored” to become co-Vice Chair of the Council and looks forward to “providing value” and “connecting with members” in her new role. She circled back on the “50 projects” as an area of focus for the Council, and spoke of opportunities for bilateral cooperation in education, healthcare, finance, technology, and innovation. She then spoke of the impact of the pandemic in introducing new technologies and changing consumer behavior, and the desire of FAB to collaborate with technology companies on new ways to deliver services to clients.

Norm Gilsdorf – President for Honeywell High Growth Regions, Middle East, Russia, Turkey, Central Asia & Customs Union – and Aamer Sheikh – President and General Manager for MENAP at PepsiCo – echoed their fellow co-Vice Chairman’s comments about the importance of the Projects of the 50. They also both spoke about the importance of supporting the U.A.E.’s drive toward sustainability and its net zero commitments. This focus on sustainability was resoundingly seconded by a number of other representatives of the Board, including Amazon, Boeing, BP, Citi, Google, and GE.

Ambassador Yousef Al Otaiba, U.A.E. Ambassador to the United States, spoke of the “very healthy growth trajectory” of the U.S.-U.A.E. relationship, saying it is a “very good relationship to invest in.”  Ambassador Al Otaiba recommended that all Business Council members “double down” on their presence in the U.A.E. and grow in country, “because we are going to grow as an economy in ways that many of us have not pictured.”

Ambassador Al Otaiba’s remarks followed an address from U.S. Charge d’Affaires at the U.S. Embassy in Abu Dhabi Sean Murphy, who cited the recent Abraham Accords, Artemis Accords, and Strategic Dialogue as indicative of the strength of the bilateral relationship. He also discussed ongoing points of collaboration including surrounding Expo 2020, where Thomas Jefferson’s Koran is displayed prominently at the U.S. Pavilion.

His Excellency Khaldoon Al Mubarak, Group CEO and Managing Director of Mubadala Investment Company, hearkened back to H.E. Waleed’s remarks about the pride he feels in Mubadala’s extensive investments in the United States. He remarked that this is the “direction Mubadala will continue to head” as the world recovers from the pandemic and U.S. economic fundamentals remain strong. This is particularly the case as the U.S. continues to play a leading role in many of those sectors that are part of Mubadala’s “bold” and “unprecedented” pivot toward investing in “specific areas of the new economy that are changing life around us,” including technology, life sciences, AI, and mobility.

His Excellency Khaldoon spoke about the “unprecedented” amount of economic and regulatory reforms the U.A.E. has instituted in the last two years, declaring, “There has probably been more done in the last two years than the last 20 years combined.” He added, “All of it is going in one direction – how to make the U.A.E. an easier place to do business and how to make the U.A.E. among the most competitive globally in terms of our ability to attract and then be the center of operations for businesses and companies all around the world.”

The Board of Directors meeting concluded with wide agreement by Directors on the Business Council’s work priorities in key areas for the rest of year and for 2022.

For more information on the Business Council’s 2021 Board meeting or ongoing activities, please contact Graham Reitman at greitman@usuaebusiness.org.