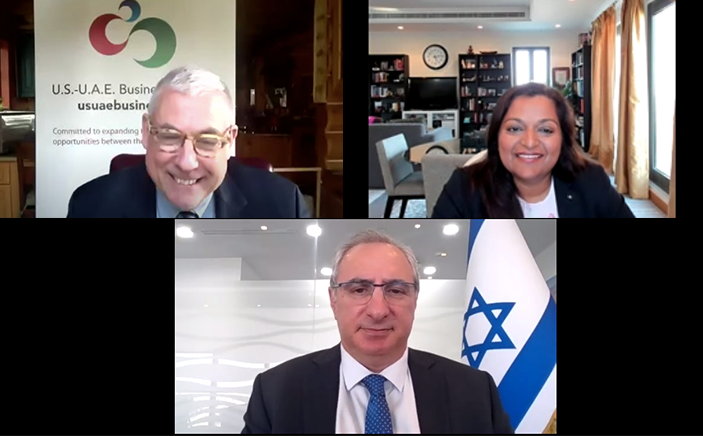 Ambassador Eitan Na’eh, Israel’s first Head of Mission to the U.A.E., underscored the significant regional impact of growing people-to-people ties between Israel and the U.A.E. during a U.S.-U.A.E. Business Council webinar. A video of the webinar, which was held on Tuesday, April 20th, can be found here.

Ambassador Na’eh opened the webinar by expressing the genuine excitement around the historic Abraham Accords, remarking, “I have to pinch myself to make sure it’s real.” Emphasizing the importance of people-to-people exchanges, he said the Accords have not only allowed for direct flights between the two countries, but also the “normalization of relationships.” Israel is now “setting the groundwork for legal frameworks for the relationship,” including in double taxation, free trade, health, the environment, and communications. Remarking on these nascent frameworks he said, “You name it, we are already in one or the other phase of negotiation,” noting that the U.A.E. and Israel are moving “full speed ahead” on issues in which they have “common ground.” He also noted the importance of this cooperation for the entire Middle East region and that Israel is meeting the rest of the region today in the U.A.E.

Dayle Carden, Managing Partner at the Elliott Barrett Group, echoed Ambassador Na’eh’s sentiments about the significance of the Abraham Accords. She explained that after 15 years in government, most of it spent in the Middle East, “to say that the announcement of the Abraham Accords was an exciting moment is an understatement.” Ms. Carden is now working to “bring the spirit of the agreement to a reality.” She also expressed her excitement about the business opportunities for both countries that have emerged from the agreement and the potential for expanded U.S.-U.A.E.-Israel trilateral cooperation.

Conversation then turned to one of the first areas in which the fruits of normalization have been realized: tourism. Already, over 100,000 Israelis have visited Dubai, and direct flights on FlyDubai, El Al, Wizz Air, and Etihad are connecting the two countries. Ambassador Na’eh stated that such exchange has “opened the eyes of people in the region to the possibilities and to the potential” of what may result from following the lead of the U.A.E. Ambassador Na’eh went on to describe the U.A.E. as a “meeting place” for business people and individuals from the entire region.

Ambassador Na’eh added that his presence in the U.A.E. has allowed for dialogue with Palestinians, Iraqis, Kuwaitis and others about “not just the narratives of the past, but about the future and how we can both contribute to peace” by “building relationships.” This, Ambassador Na’eh underscored, is one of the most exciting aspects of his work and a major achievement of the Abraham Accords. He explained that people want peace and want change. Because this “change is coming from the bottom,” a new model for peacemaking is emerging and will have “ripple effects” across the Middle East and the world.

Transitioning to the business opportunities emerging from the Abraham Accords, Ambassador Na’eh listed agriculture, water, medtech, AI, cybertech, and fintech as areas of cooperation. He explained that while Israel brings knowledge and expertise in agtech and water, there remains much to be learned from the Emiratis in this space. In the medtech field, Ambassador Na’eh commented, the U.A.E. serves as an important regional hub. And, in the cybertech and fintech spaces, the U.A.E. serves as an ideal location for companies to “scale and expand through the Middle East region.” He repeated the adage that while Israel is the region’s “startup nation,” the U.A.E. is the regional “scale-up nation.”

Ms. Carden added that U.S. companies also have the potential to make major contributions to economic growth through trilateral business relations. She explained that U.S. companies have a great “depth of experience working in the region and specifically the U.A.E.,” citing the Cleveland Clinic as a major example in the healthcare space. This experience, in addition to the “sheer size” of U.S. companies in the region, could allow for trilateral partnerships whereby smaller Israeli companies, Emirati partners, and major U.S. companies join to provide scale-up opportunities and “tailored solutions for not only the U.A.E. but the broader region.” She noted that U.S. companies will need to explore the possibility of moving Israel into their Middle East regional business units to facilitate such partnerships, as many companies currently include Israel in the Europe region.

Ambassador Na’eh then zoomed in on cooperation in the health sector and life sciences. He recognized the rapid pace of vaccination efforts and the life science expertise in both Israel and the U.A.E. as key factors paving the way for successful partnerships. Ambassador Na’eh pointed to an ongoing Israeli life sciences delegation in the U.A.E. as an example of ongoing cooperation in the space. He also noted that COVID-19 has reinforced the importance of medicine, particularly remote medicine, hybrid medicine, and the digitization of medicine and that discussions between the U.A.E. and Israel continue in this regard. Moreover, he explained that collaboration is taking place at the research level as well, with student exchanges and joint training. He remarked that “we are just at the beginning” of exchange in this critical vertical.

Expo Dubai is one avenue that is poised to accelerate such exchange. Ambassador Na’eh noted that Israel had planned to set up a pavilion even in advance of the signing of the Abraham Accords. This venue, he said, will allow Israel to showcase its innovative solutions and capabilities. Israel will also work with the U.A.E. government on special programming.

In addition, Danny Sebright, President of the U.S.-U.A.E. Business Council announced that the Council will organize trilateral U.S.-U.A.E.-Israel programming at Expo to highlight the important ways in which the three countries can together advance innovation and economic growth.

The discussion concluded with a reflection on the significance of this moment for the future of the Middle East. Ms. Carden explained that bringing “Israeli innovation to the U.A.E.” is poised to “make life better for not just folks in the U.A.E. but also in the broader region.” Moreover, Ms. Carden stated, she is “extremely optimistic that this is just the beginning not just for Israel and the U.A.E. but for Israel and the broader region.”

Ambassador Na’eh noted the magnitude of developing Israel-U.A.E. ties. He explained, “A window of opportunity has been opened,” and he hopes that as governments and as people, “we are up to the task” and “creative enough” to embrace “new structures and new thinking about the Middle East.”