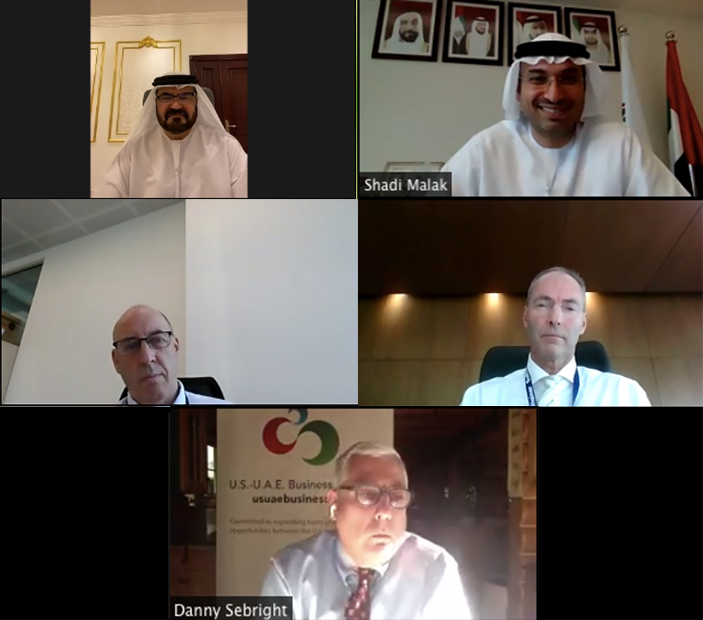 The coronavirus pandemic upended global supply chains, and changed how goods move around the world. In a Business Council webinar held on 6 October 2020, four leaders of the U.A.E.’s logistics sector discussed the impact of the pandemic on their industry and what the future holds for the logistics industry. A video of the webinar can be found here. Mohammed Al Muallem, CEO & Managing Director of DP World U.A.E. Region & CEO of JAFZA, began the session by emphasizing the benefits of the U.A.E.’s strategic location and state-of-the-art infrastructure. Mr. Al Muallem remarked, “We are looking at nearly 3 billion consumers who are being connected from Dubai and the United Arab Emirates with fantastic connectivity, whether it is by air, by land, or by sea.” Mr. Al Muallem also discussed how DP World U.A.E. Region kept trade flowing during the pandemic by implementing a rapid action plan in April to ensure the health and safety of its staff across all of its business activities. He also examined how “technology has been a part of [DP World’s] plans, and part of the U.A.E.’s vision,” highlighting the agreement between DP World, U.A.E. Region and robotics and AI specialist DGWorld to equip Jebel Ali Port with a fleet of Autonomous Internal Terminal Vehicles (AITVs). This agreement will help DP World, U.A.E. Region ultimately increase the terminal’s efficiency. Jebel Ali Port operated by DP World, U.A.E. Region, is the largest in the Middle East and the flagship facility of DP World’s portfolio of over 80 marine and inland terminals across six continents.

Robert Sutton, Head of the Logistics Cluster at Abu Dhabi Ports, discussed important new developments with Abu Dhabi Ports, including its recent acquisition of MICCO Logistics, which will give it greater flexibility across the entire supply chain. Mr. Sutton further reviewed how Abu Dhabi has ensured supply chain resilience, drawing on some of the insights from a white paper Abu Dhabi Ports published in June. Mr. Sutton noted that “within Abu Dhabi Ports there are five business units, one of those being a digital business unit, [which] makes sure we are at the forefront of technology, and that we are leveraging that technology to the benefit of our customers, and of course to the Emirates.” Abu Dhabi Ports owns, manages, and operates 11 ports and terminals in the U.A.E. and Guinea.

Charles Menkhorst, CEO of Gulftainer, touched upon the company’s response to the pandemic and how they ensured the flow of goods through their ports around the world. He noted that despite the pandemic Gulftainer “will handle and deliver the exact same volume [in 2020] as 2019.” Mr. Menkhorst also discussed its Future of Ports Startup Challenge, saying, “[Gulftainer] opened up our doors, and invited many entrepreneurs and innovators around the world to join us in our ambition to develop services and solutions that deliver tangible results for our clients.” Gulftainer is the largest privately owned, independent port management and logistics company in the world. Based in the Emirate of Sharjah, the company’s primary role is to operate the container terminals in Port Khalid and Khorfakkan on behalf of Sharjah Port Authority. Gulftainer is also involved internationally in Saudi Arabia, Brazil, Lebanon, Pakistan, Iraq, and the United States, where it operates ports in Delaware and Florida.

Shadi Malak, CEO of Etihad Rail, spoke about the importance of rail transport to the U.A.E, hearkening back to lessons learned during a visit with the U.S.-U.A.E. Business Council to the United States a decade ago in which it was noted there were few successful cities in the United States without a railroad. Mr. Malak stressed that Etihad Rail will connect all the ports represented by other participants on the webinar, serving a a great connector. and that “Etihad Rail’s ambition is to be a catalyst for transformation, and support the growth and quality of life in [the U.A.E.].” Mr. Malak remarked that the pandemic has not derailed Etihad Rail’s plans for the U.A.E. and he is unaware of any changes to the plans of the U.A.E.’s regional neighbors. Etihad Rail is managing the development, construction, and operation of the U.A.E.’s national freight and passenger railway network. The railway network will link the principal centers of population and industry of the U.A.E, and will form a vital part of the planned railway network across the GCC. Mr. Malak also noted that Etihad Rail was able to hit 100% punctuality despite the ongoing pandemic.

Following remarks by the panelists, Mr. Danny Sebright, President of the U.S.-U.A.E. Business Council, moderated a question and answer session during which the panelists elaborated on the  role of new technologies in transforming the future of the industry, China’s growing presence in the region, and the possibilities unlocked by the Abraham Accords.

The videoconference was attended by over 150 senior executives from leading American and Emirati companies as well as by U.S. and U.A.E. government officials.