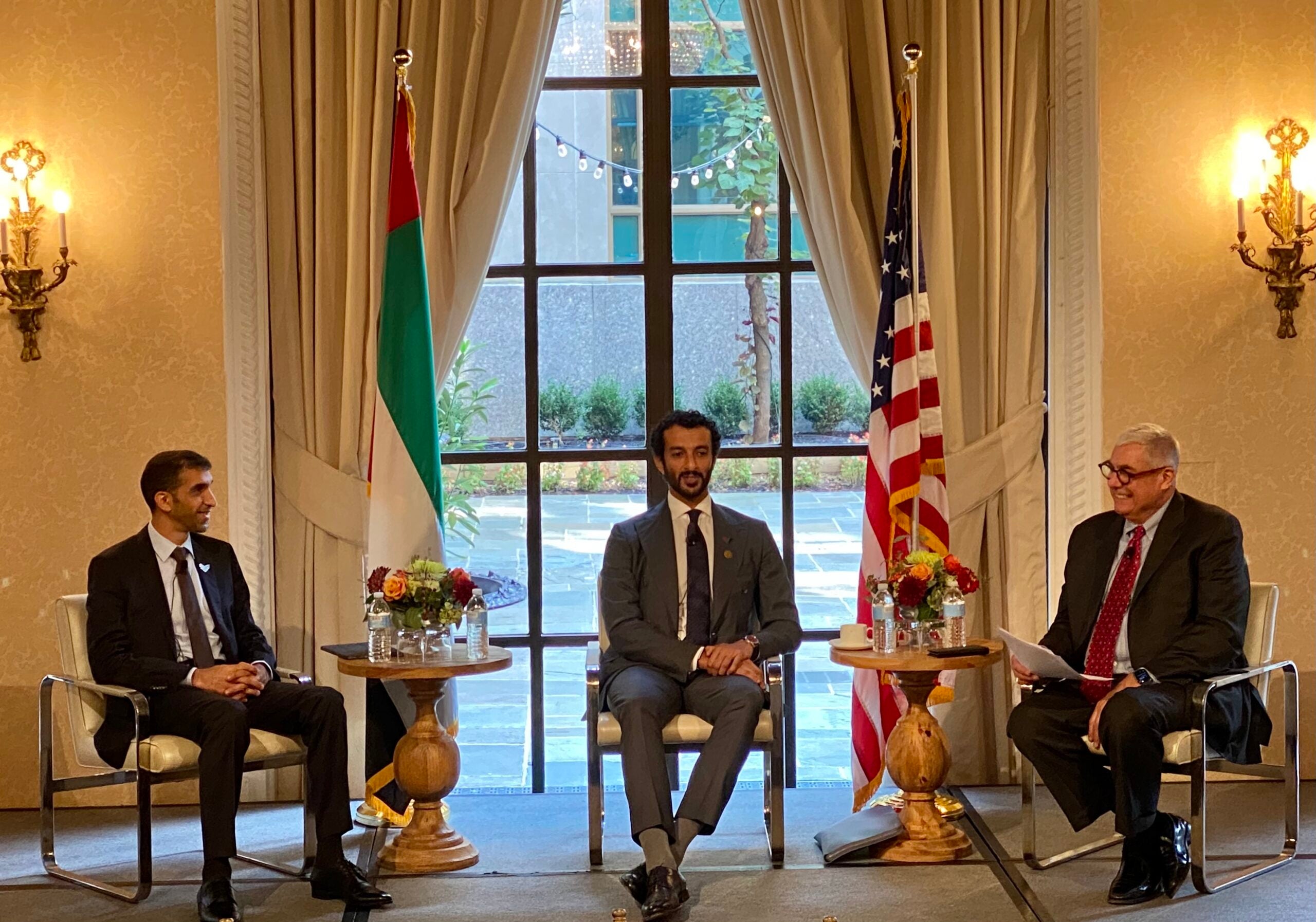 The U.S.-U.A.E. Business Council hosted a luncheon with His Excellency Abdullah bin Touq Al Marri, U.A.E. Minister of Economy, and His Excellency Dr. Thani bin Ahmed Al Zeyoudi, U.A.E. Minister of State for Foreign Affairs on Tuesday, September 14th at the St. Regis in Washington, DC. Their Excellencies detailed the goals and objectives of their visit to the U.S., which comprises one of the largest economic delegations to the U.S. under the Biden administration. A video recording of the Fireside Chat portion can be found here.

U.S.-U.A.E. Business Council President Danny Sebright  moderated a discussion with the ministers that covered the current state of the U.A.E. economy post COVID-19, the measures the U.A.E. is taking to create a better environment for business, and Expo 2020, which is set to launch in October.

H.E. Abdullah bin Touq Al Marri detailed the ‘unprecedented’ measures that the U.A.E. took to protect its residents and support business in the beginning of the pandemic.  He added that the stimulus and aid offerings which the government provided offered SMEs in danger a lifeline. In turn, H.E. Dr. Thani bin Ahmed Al Zeyoudi stated that the stimulus lifeline paid off with the U.A.E.’s economy soaring back, thanks as well to its high vaccination rates and strong COVID-19 measures. He mentioned how U.A.E. companies such as Emirates and Etihad pivoted from tourism to cargo, and how that pivot allowed the U.A.E. to become a global distributor of vaccines.

H.E. Abdullah bin Touq Al Marri highlighted new reforms set to launch soon that will make the U.A.E. an even more attractive proposition for business. H.E. Al Marri also spoke of an upcoming investment conference which the U.A.E. is organizing, Investopia, which will solidify the U.A.E.’s status as a global hub and a scale-up nation for business. H.E. Dr. Thani bin Ahmed Al Zeyoudi stated that the U.A.E. is focusing on verticals that will allow it to be better prepared for future crises like the pandemic, such as food security, agtech, and space. He also mentioned the U.A.E.’s goal to lower the costs that businesses face to start up, grow, and expand.

H.E. Abdullah bin Touq Al Marri also briefly discussed his goals for this visit to the United States and meetings with U.S. officials. He discussed how logistics, microchip technology, renewable energies, and climate change are at the top of the U.A.E.’s list of priorities. When asked about U.S. aluminum tariffs,  H.E. said that this is a global supply issue, and that it must be addressed in a smart way on an international level.

H.E. Dr. Thani bin Ahmed Al Zeyoudi highlighted two factors that differentiate the U.A.E. from its peers, in light of heightened regional economic rivalry. First, the U.A.E.’s stability and leadership, which sends a strong message to business. “No matter the global situation, we will manage,” he remarked. Second, H.E. stated that the U.A.E. no longer considers itself a regional hub for business, but rather a global one. With four billion people within a three hour flight, the U.A.E. is in a constant discussion to open new economic ecosystems and remove trade barriers with the international community.

H.E. Abdullah bin Touq Al Marri went on to highlight Expo 2020, and stated that the U.A.E. stands ready to host the world. With COVID-19 safety measures and a packed schedule of cultural and business events and roundtables, H.E. encouraged businesses to travel to the U.A.E. to experience ‘the greatest show on Earth’.