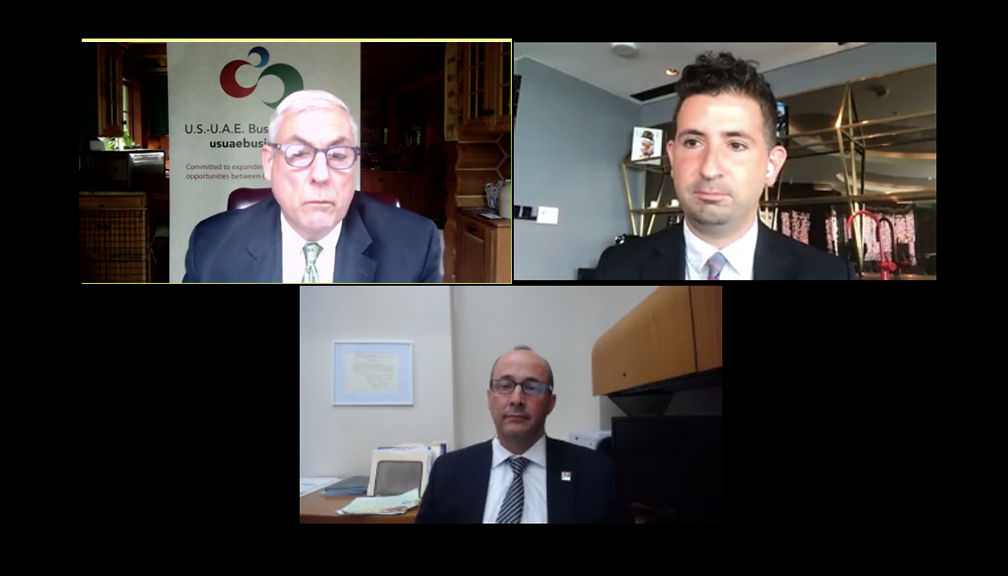 Officials from the U.S. Department of Commerce reviewed the U.A.E.’s “remarkable” progress in protecting intellectual property during a Discover America webinar co-hosted by the U.S.-U.A.E. Business Council. A video of the webinar, which took place on 25 May 2021, can be found here.

In conversation with U.S.-U.A.E. Business Council President Danny Sebright, Thomas Bruns, Regional Senior Commercial Officer at the U.S. Embassy in Abu Dhabi, shared the “terrific news” of the U.A.E.’s removal from the USTR’s Special 301 Report Watch List, which designates countries with areas of concern related to intellectual property protection. Thomas stated that the U.A.E.’s removal from this list is “only the beginning” for the U.A.E., as there is a “real momentum toward further reforms to develop the intellectual property environment in-country.” He tied these reforms to the U.A.E.’s goal to move further toward a “knowledge economy.”

Peter Mehravari, U.S. Intellectual Property Attache for Middle East and North Africa, honed in on the factors that contributed to the U.A.E.’s removal from the Section 301 watchlist. Peter explained that the 301 process is “industry-driven,” meaning that private sector input led to the inclusion of the U.A.E. on the Section 301 Watch List. Peter described the U.A.E.’s listing as a “wake-up call” to everyone involved. Peter described the conversation that followed between the U.S. and U.A.E governments, and between industry and government, as “one of the most incredible experiences” of his career.

Peter explained that a pharmaceutical issue in particular “sparked the realization there needs to be tangible change” with how the U.A.E. handles intellectual property. Prior to 2017, the U.A.E. was deemed “one of the safest places to bring innovative pharma and bio” due to  “behind-the-scenes” measures to protect intellectual property in this vertical. The challenge to U.S. IP rights in one instance “shocked industry” and made everyone in the industry “nervous.” Peter stressed that “for intellectual property, certainty is key,” particularly in an industry like pharmaceuticals where there is “so much IP.” The U.A.E. government worked to find an industry-driven solution, and the U.A.E. passed Decree 231, which provides “some of the best protection for innovative pharma and bio in the region.” Peter noted that this Decree demonstrates the U.A.E.’s desire to bring more innovative pharmaceutical companies to the country, and underlines that the “U.A.E. is a good place to do business for bio and tech.”

Peter also noted “incredible developments” in the U.A.E.’s crackdown on counterfeit goods, and its importance for tightening the U.A.E.’s intellectual property enforcement regime. He noted the “significant increase in proactive seizures” by Dubai Customs, as well as “quick raids” by Abu Dhabi authorities. Moreover, he signaled out the “transformation” of Ajman China Mall, which used to be the “biggest challenge regarding counterfeit goods” for U.S. companies in the U.A.E. He noted that U.A.E. authorities are not just seizing goods, but publicly destroying or recycling them as well, in a visible sign of its intolerance toward counterfeit goods.

Peter also noted some promising signs related to Collective Management Organizations (CMOs). He remarked that music licensing is “critical” not just for ensuring compensation for U.S. artists, but also for supporting local U.A.E. artists and building a local music scene. He said that the U.A.E. is making progress in this regard, although this progress may be “slower than one might like.” He added that Expo is putting in place a requirement that all music at the venue is properly licensed, which he sees as an important “win for industry” and a baseline for further progress.

In this regard, Peter asked the SMEs in the audience to consider “what makes them competitive,” and, “if it disappeared over night, could their business continue?” If not, Peter suggested that they may have intellectual property they need to seriously consider how to protect. Thomas encouraged SMEs to take advantage of the resources available to them, as the Department of Commerce helps provide SMEs with the advice that they need to do business in another country.

Alongside talk of intellectual property, the panelists briefly discussed Expo 2020, and the opportunities that American companies have to be involved in the U.S. Pavilion. Pete noted that the U.S. will be convening an IP Attache conference during Expo 2020 that will have an industry component supported by the Business Council. Thomas and Peter encouraged all interested companies to contact them for more information.